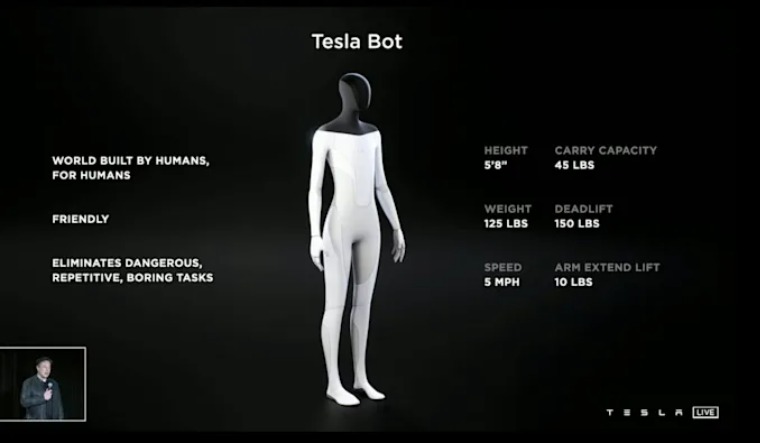 The humanoid robot will be able to perform dangerous, repetitive, or boring work that people don't like to do. “It should be able to, you know, please go to the store and get me the following groceries, that kind of thing,” Musk said. The robot, code-named "Optimus," is built with the same processors and sensors that Tesla's cars use for self-driving functions. The prototype of the robot, around five foot eight inches tall, wighing 125 pounds and made of lightweight materials, is likely to be launched next year.

A mannequin version was the humanoid robot that wasn’t working was on the stage when Musk introduced Tesla Bot.

Commenting on the nature of work in future, Musk said, "Essentially, in the future, physical work will be a choice. If you want to do it, you can, but you won't need to do it."

Tesla Bot is “intended to be friendly and navigate through a world built for humans,” Musk said.

However experts disagree about the early launching of a humanoid robot that does all kinds of physical work. "I can safely say that it will be much longer than 10 years before a humanoid bot from any company on the planet can go to the store and get groceries for you," Raj Rajkumar, professor of electrical and computer engineering at Carnegie Mellon University told Reuters.

AI Day, hosted by Tesla, showcased some of the artificial intelligence and supercomputer technologies. Tesla unveiled in-house designed chips for its high-speed computer, Dojo, which would be operational next year. Musk had asked his team 'to design a superfast training computer.'