The three astronauts are under Level-2 quarantine 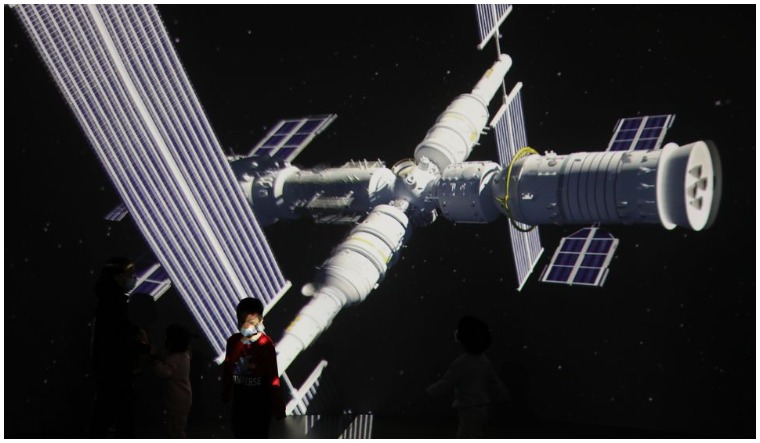 A child stands near a giant screen showing the images of the Tianhe space station at an exhibition featuring the development of China's space exploration on the country's Space Day at China Science and Technology Museum in Beijing, China | Reuters

China on Monday announced plans to send three male astronauts to its space station next month for a three-month stay, a day after the successful docking of a cargo spacecraft with it, hoping to achieve yet another milestone in its ambitious space programme.

The country launched cargo spacecraft Tianzhou-2 on Saturday, carrying supplies, equipment and propellant which had successfully docked with the space station core module Tianhe, according to the China Manned Space Agency (CMSA).
Combined with Tianhe, Tianzhou-2 will replenish Tianhe's propellant, it said.

China, which launched its space station core module Tianhe on April 29, now plans to complete the verification of key technologies and the in-orbit construction of the space station through multiple launches within two years, state-run Xinhua news agency reported.
Yang Liwei, director of the China Manned Space Engineering Office and the country's first astronaut, said that the three astronauts are getting ready to travel by manned spacecraft Shenzhou-12 in June to dock with Tianhe and stay there for three months.

Yang, who went into space in the Shenzhou-5 craft on October 15, 2003, told the state-run China Central Television (CCTV) during the weekend that the three astronauts of the Shenzhou-12 mission will stay in space for three months, during which they will conduct tasks, including repair and maintenance, appliance switch and scientific tasks.
The three astronauts, who will take the Shenzhou-12 spacecraft to the space station core cabin in June, are now under Level-2 quarantine, with all related work having entered a final sprint stage, according to a report by the state-run Global Times.

Although there will not be any female astronauts in the upcoming Shenzhou-12 crewed mission, they will basically participate in every following flight mission, Yang said.
The three astronauts will take on command and engineering roles, he said.

With the successful launch of the Tianzhou-2 cargo ship, China has completed its first two launch missions out of the total 11 of the intensive space station construction phase, scheduled from April 29, 2021 to 2022.
Three will be for modules, four for cargo spaceships and four for manned spaceships, the report said.

Four flight crews have been selected from the first and second batch of astronauts for the four Shenzhou missions. Astronauts will conduct multiple tasks outside the cabin, carrying out repair and maintenance on the spacecraft, and other construction missions, Yang said.
"Astronauts coming out of the cabin will become a new routine, and the duration of such activities will be greatly expanded," he said.

China's space station has also been equipped with the robotic arm over which the US has raised concerns for its possible military applications.
The arm can be stretched to 15 meters long, which will also play a vital role in building the space station in orbit, Zhou Jianping, chief designer of China's manned space engineering project, said previously.

Astronauts will team up with the robotic arm to make in-orbit space station construction and maintenance possible, Yang noted.
China in the past has launched several scavenger satellites fitted with robotic arms to gather and steer space debris so it burns up in the Earth’s atmosphere.

James Dickinson, commander of the US Space Command, told a congressional hearing last month that the technology “could be used in a future system for grappling other satellites” and was therefore a concern to the US military, the Hong Kong-based South China Morning Post reported.
The Chinese space station was expected to be a competitor to the aging International Space Station (ISS) which is a modular space station in low Earth orbit.

It is a multinational collaborative project involving five participating space agencies, including America’s NASA, Russia’s Roscomos, Japan’s JAXA, ESA of Europe and CSA of Canada. China's Tiangong is expected to be the sole space station once the ISS retires.
A major space power, China launched its first Mars probe last year. The Chinese rover is currently exploring the red planet.