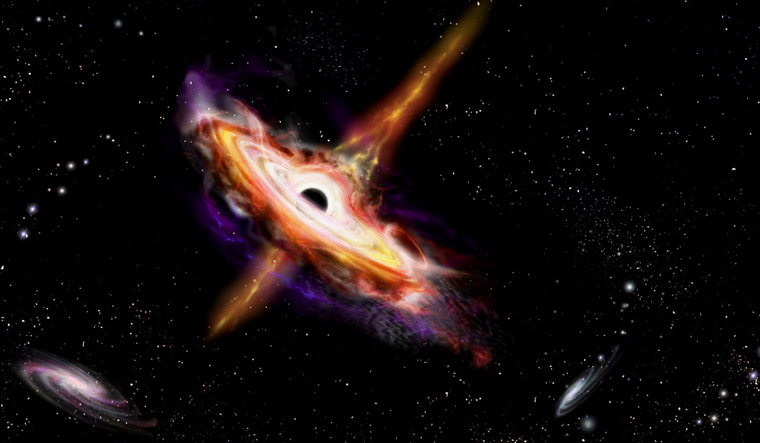 A group of astronomers have discovered a dozen quasars that have been warped by a naturally occurring cosmic "lens" and split into four similar images.

Quasars are extremely luminous cores of distant galaxies that are powered by supermassive black holes.

This rare discovery increases the number of known quasars or quads by about 25 per cent and can help determine the expansion rate of the universe and help address other mysteries.

Quadruply imaged quasars are rare, and the first quadruple image was discovered in 1985.

Over the past four decades, astronomers had found about fifty of these "quadruply imaged quasars" or quads for short, which occur when the gravity of a massive galaxy that happens to sit in front of a quasar splits its single image into four, the Department of Science and Technology (DST) said.

The study by Gaia Gravitational Lenses Working Group (GraL) of astronomers, which included scientists from Aryabhatta Research Institute of Observational Sciences (ARIES), Nainital, an institute of the DST, spanning only a year and a half, demonstrates the power of machine-learning to assist astronomers in their search for these cosmic jewels.

The study has been accepted for publication in 'The Astrophysical Journal', the DST said.

"The quads are gold mines for all sorts of questions. They can help determine the expansion rate of the universe and help address other mysteries, such as dark matter and quasar 'central engines'," said Daniel Stern, lead author of the new study and a research scientist at the Jet Propulsion Laboratory USA.