Fossils of eggs were discovered in Mohantola, 4km from Mandla district headquarters 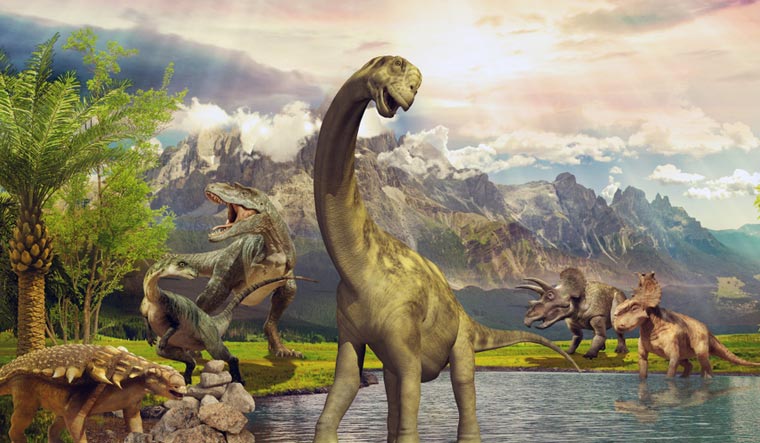 Seven fossilised eggs of herbivorous dinosaurs belonging to the Cretaceous period (65 million years ago) have been found in Madhya Pradeshs Mandla district, a paleontologist claimed on Thursday.

It seems these eggs belong to a possibly new species of dinosaurs hitherto not known in India, he said.

These fossils of eggs were discovered in Mohantola locality, 4km from Mandla district headquarters, said Prof P K Kathal, who is attached to the Centre of Advanced Study in Geology at Sagar-based Dr Harisingh Gour Vishwavidyalaya, a central university.

I visited the site on an invitation from Prashant Shrivastava, a schoolteacher in Mandla, on October30. It was he (Shrivastava) who obtained eggs from the site, when he first saw one of them in hands of a local boy.

The eggs have an average circumference of 40 cm with average weight of 2.6 kg each, he added.

Kathal said these eggs were spotted in a newly-dug tank during the coronavirus-induced lockdown.

It seems these eggs belong to a possibly new species hitherto not known in India, the researcher said.

These reptiles used to come from far off regions to lay eggs on sandy banks of rivers in this area, identified scientifically as Lameta bed, he added.

This find will help us understand the spread of dinosaurs and shed some light on causes of their extinction. The eggs seem to belong to a new species of beaked or sauropod dinosaur, he added.

The first dinosaur fossils in India were discovered in 1828 by Colonel Sleeman in the cantonment area in Jabalpur district of Madhya Pradesh, Kathal said.

Later, some eggs were recovered from the same area as well as from the Kuchhi region near Dhar district of Madhya Pradesh, he added.