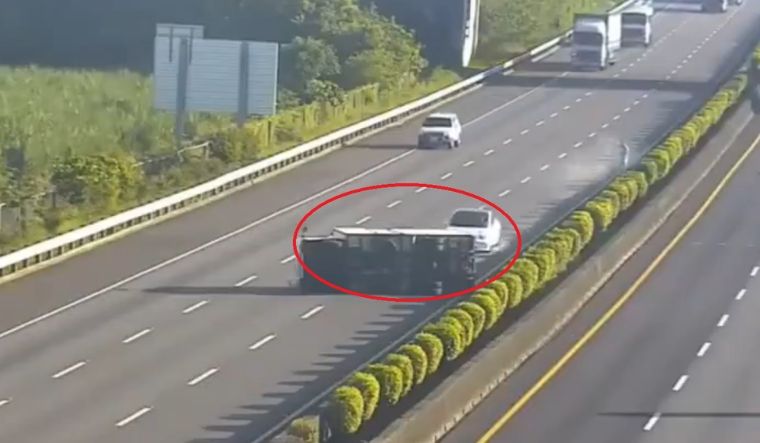 Even as Elon Musk's is basking in the glory of SpaceX making history in commercial space technology, a recent accident that took place in Taiwan might bother him. The video of a Tesla Model 3 on autopilot crashing into an overturned truck on a Taiwanese highway is going viral. The video has also triggered an online debate on the safety concerns of autopilot technology.

According to the online portal The Drive, a 53-year-old driver, known as Huang, was said to be driving his Tesla at 6:40 am on June 1 when he failed to spot an overturned box truck occupying the two leftmost lanes of the highway. As per reports, the driver claimed that the sedan, traveling at 68 miles per hour, was on Autopilot when it "collided with the truck, crashing into the roof of the box with enough force to move the entire commercial vehicle several feet."

In the video, smoke can be seen pouring from the Model 3's tires about two seconds prior to impact—Huang says he slammed on the brakes once he noticed the truck, but it was too late. What's more alarming is that the Tesla reportedly didn't slow down for the driver of the truck who was standing about 100 feet before the overturned vehicle attempting to warn the Tesla driver of the upcoming danger.

The incident has enthused tech-savvy autophiles on social media.

The guy in the video was lucky that the truck was rolled over. If it had jacknifed, this white Tesla would end up like that one.

Fire Trucks are not white. They have a lot of lights. But Teslas plow into them.

Still auto-pilot is significantly safer than manual driving, by numbers. How long did it take him to notice the truck when the car is always yelling to pay attention

Some Twitter users noted that Tesla's Autopilot is not capable of spotting stationary objects.

Honestly this guy obviously wasn’t paying attention AT ALL. While I’ll admit autopilot is NOT ready for self-driving without a human to oversee its operation. 100% of the blame is on the driver as he has PLENTY of time to stop with the truck in clear view for well over 1500ft.

full breaks plus tyres blocked (smoke) at 0:11 this ends shortly before impact (autopilot disables itself?)

driver surely wasn't paying attention as the car goes in a straight line, everybody awake at the wheel would have at least tried to avoid collision