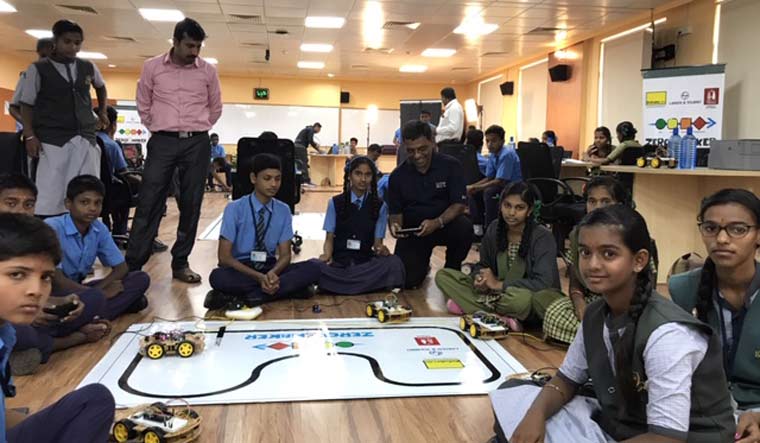 This ‘Robo Race’ will give you an adrenaline rush. Half a dozen robots track a linear path on the floor, wobble their way to the finish line, exuding confidence just like their makers. A little away, the robots are aspiring to be the next Lionel Messi, even as the onlookers prod and cheer and give out a war cry during the Robo Soccer tournament. The developers of these robots had little idea about robotics six months back. Thanks to the “Zero to Maker” (Z2M) programme launched by Larsen and Toubro, as many as seven government high schools in rural Mysuru can now boast of schooling young innovators.

Besides developing school infrastructure to benefit the underprivileged children, the Indian multinational conglomerate company hoped to build skills in science and technology. The students were given tablets pre-loaded with the curriculum designed to better their grasp of subjects, especially science. Z2M program of L&T that started in August 2019 was part of their Corporate Social Responsibility.

“The experiential programme for teachers and students hoped to transform the underserved communities to create entrepreneurship and wealth. The programme encourages the students to ideate, imagine, design and create. The students started from the scratch—by learning to use the computer, google, and finally learn basics of designing and coding,” says project co-ordinator Rajesh Nair, who is a professor of practice, innovation and entrepreneurship, Asia School of Business, Kuala Lumpur.

The open house at L&T Training Centre in Mysuru on Monday opened up an exciting world of robotics even as students came up with innovative ideas for home automation, soil monitor sensors and security systems. 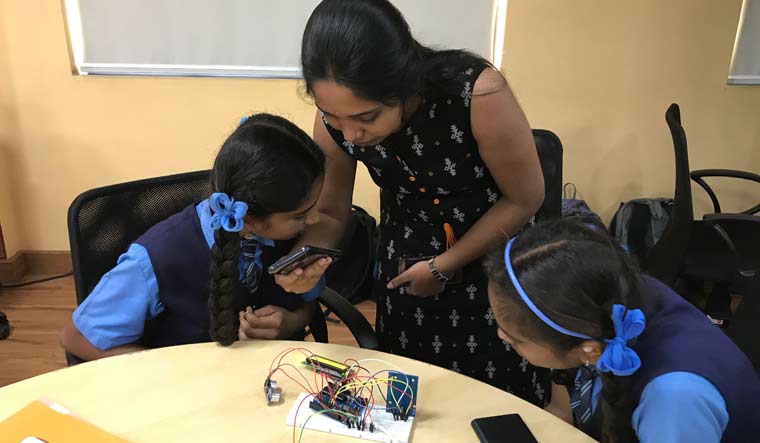 “I always wondered how the colourful serial lighting set blinked in tandem. Last August, I barely knew anything about computers or robotics. But after I started attending the L&T programme, I saw a different world. I learnt how sensors work, the input and output devices and the different applications,” admits Srushti, a Class 8 student from Puttegowdana Hundi government school.

Srushti and her team has developed a blue-tooth relay control switch board. “With the four-channel relay control board. You can switch on and switch off the lights and fans in your home or office from a remote location. You can monitor electrical appliances like fan, refrigerator and air conditioner too, which helps save power. If a workplace has multiple lights, relay board allows their simultaneous switching on and switching off with a single switch,” she explains.

The innovation at Hootagalli school can be a boon to the farmers. The 'soil monitor sensor' developed by Class 9 students, determines the soil temperature and moisture, which helps farmers decide on the type of crop and enhance soil fertility. 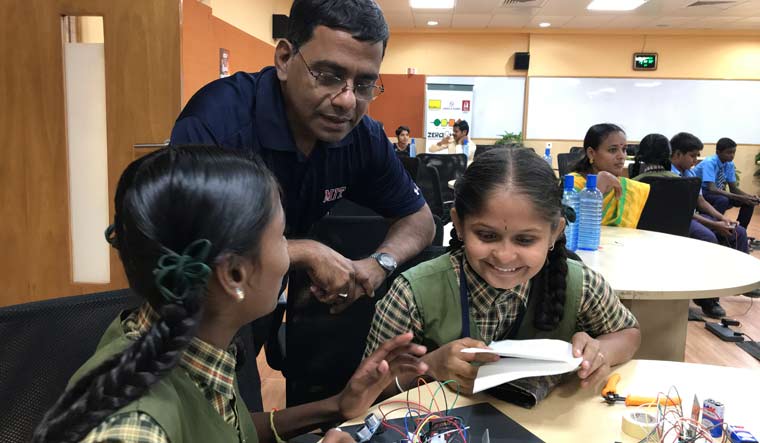 Chandana and Kavya, students of Class 8 in Puttegwdanahalli school, are excited with the idea of creating “magic” at their homes. The young minds are awestruck with the ultrasonic sensors, that “feel” the person or object approaching closer to the door and automatically opens them. Once the object moves away from the door, they close. “We have seen such doors at malls and big hotels. It is only now we understood the technology behind their automatic open-close feature,” beams Kavya.

Varshitha, an engineering graduate who is one of the mentors, says, “The children were familiarised with the basic connections, sensors, boards and their applications during the training. Now, they experiment on their own. We gave them topics and they came out with innovative ideas.”

When Mahadevamma, a Class 8 student from Gungralchatra village discussed the idea of a bluetooth-based security fencing system, little did they know it could also be upgraded to mitigate the effects of man-animal conflict in rural areas.

“The ultrasonic sensor will give out an alarm in the form of a flash or a buzzer, the moment, an animal or human pass through the fence (breach the fence). It can be installed in the playgrounds, agricultural farms or in places threatened by wild animals like leopard or tigers. The training has given me a new confidence to be an innovator. I want to invent something which can be useful to the society,” says Mahadevamma. 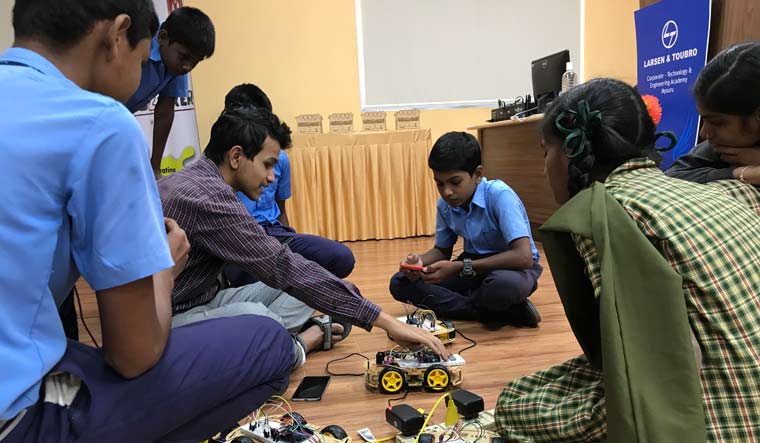 Vidyashree, a Class 10 student from Varuna village, says, most people use new technologies every day but are not aware of it. “The course has made me aware of how we use technology at every step. Our project on home security system uses the Radio Frequency Identification Device, which has a unique number. Only the user with a RFID tag whose number matches that of the RFID will be granted access to enter the premises. This helps in authorising only the closed groups to enetr and exit a premises and can be used to restrict the number of people. The ultrasonic sensor also keeps a count of the number of visitors (who pass by),” says Vidyashree.

Smitten by the robotics bug, the students of these government schools say they want to be innovators. The transformation is evident, say teachers, who are happy with their students showing interest towards science now.

“My students always felt science and technology were tough subjects as there was so much to learn. They sometimes told me it is only for English medium students. But this programme changed it all. The module was great – the students learnt basics of computers, robotics and electronics and graduated from small activities to big projects. Now they can easily relate the activity to the concepts in the textbook. They are confident too. While designing the project, they also learnt budget management and had the liberty to fail too. I hope this orientation will see more students take up the science stream now,” says Gopalakrishna, science teacher with the Government High School, Hanchya, Mysuru.