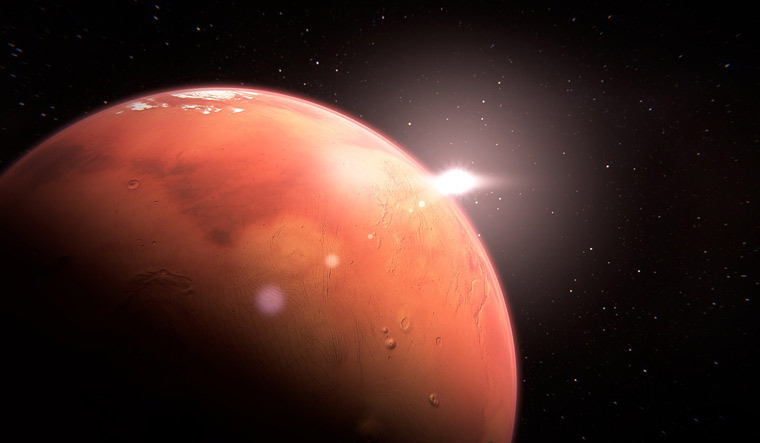 NASA researchers have created the first map of wind circulation in the upper atmosphere of Mars, which helps scientists to better understand the workings of the Martian climate, giving them a more accurate picture of its ancient past and its ongoing evolutio

In a first-of-its-kind study carried out on any planet beside earth, NASA scientists have mapped the wind flow patterns in the upper atmosphere of Mars—120 to 300 kilometers above the Red Planet's surface.

The researchers, including those from the University of Maryland, Baltimore County (UMBC) in the US, reprogrammed probes aboard NASA's Mars Atmosphere and Volatile EvolutioN (MAVEN) spacecraft to collect wind measurements on the Red Planet.

The reprogramming allowed an instrument called the Natural Gas and Ion Mass Spectrometer (NGIMS) aboard MAVEN—that was normally stationary—to "swing back and forth like a windshield wiper fast enough," the scientists said in a statement.

They added that this tweaking enabled them to gather data on the winds flowing across the Martian surface.

The study, published in the journal Science on Thursday, was based on data collected by MAVEN two days per month from 2016 to 2018.

"It's a clever re-engineering in flight of how to operate the spacecraft and the instrument," said Mehdi Benna, study co-author from NASA Goddard Space Flight Center (GSFC) in the US.

The researchers said the wind flow patterns observed in the Martian upper atmosphere matched what was predicted from theoretical models.

The study noted that the average circulation patterns from season to season were very stable on Mars.

However, the scientists said the shorter-term variability of winds in the upper atmosphere was greater than anticipated.

"On Mars, the average circulation is steady, but if you take a snapshot at any given time, the winds are highly variable," Benna said.

The researchers said more work is needed to determine why these contrasting patterns exist.

Another insight gleaned from the study is that the wind hundreds of kilometers above the Red Planet's surface still contained information about landscapes below such as its mountains, canyons, and basins.

Benna explained that as the air mass flows over those features, "it creates waves--ripple effects—that flow up to the upper atmosphere," and can be detected by MAVEN and NGIMS.

"On Earth, we see the same kind of waves, but not at such high altitudes. That was the big surprise, that these can go up to 280 kilometers high," he added.

The researchers believe the wind waves on Mars, called "orthographic waves," last so long unchanged because of two reasons.

For one, they said, the atmosphere on Mars is much thinner than it is on the Earth, so the waves can travel farther unimpeded, like ripples travelling farther in water than in denser fluids like molasses.

Another reason they hypothesise is that the average difference between geographic peaks and valleys is much greater on Mars than it is on Earth.

The scientists said it's not uncommon for mountains to be 20 kilometers tall on Mars, whereas on the Earth, the tallest peak—Mt. Everest—is not quite nine kilometers tall, with most terrestrial mountains being much shorter.

"The topography of Mars is driving this in a more pronounced way than it is on Earth," Benna said.

The research team hopes to figure out whether the same basic processes are in action on Earth's upper atmosphere.

"We had to go take these measurements on Mars to eventually understand the same phenomenon on Earth," Benna said.