Abhyas: A drone or a destroyer? 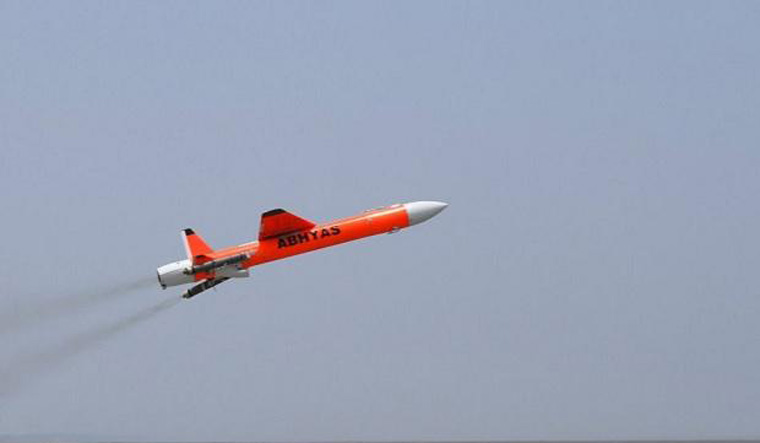 With the development of Abhyas, India has become the only nation to have such high-end multiple use drone technology in the sub-continent.

Minutes before 12 Mirage jets of Indian Air Force entered Pakistan airspace to bomb the Jaish-e-mohammad terror camp in Balakot in the early morning of February 26, two front-line Sukhoi 30 jets also moved menacingly towards Pakistan. Their aim was to divert attention of Pakistan's air defence mechanism, so that Mirage jets could complete their mission undetected.

The IAF mission was successful as the jets pounded the JeM hideouts deep inside the Pakistan territory. But was sending Sukhois on the attention-diverting mission the only option? Was it necessary to risk life of man and machine?

The IAF establishment believes that all such effort was part of its offensive strategic mission, and hence necessary. But now, the Defence Research Development Organisation (DRDO) has a solution, which could reduce the higher risks to 'the man and the machine.'

After eight years of development, scientists of the DRDO's Bangalore-based Aeronautical Development Establishment (ADE), on May 13, carried out successful flight trial of High-speed Expendable Aerial Target (HEAT), known as Abhyas.

For the uninitiated, Abhyas (HEAT) is a drone. It is designed to offer a realistic threat scenario for the practice of weapon systems. But it is much more than an aerial target. Besides for training purpose, it can be used for multiple things. It is country's first locally developed system.

After Balakot, the IAF has learnt many lessons to bolster its combat capability. The government's decision to fast-track arming of over 40 Sukhoi fighter jets with the BrahMos supersonic cruise missile and to tackle the shortage of Airborne Warning and Control System (AWACS) are an outcome of Balakot strike audit.

“The primary purpose is to sharpen the existing air-defence mechanism that is why it is named as Abhyas (means practice). These targets imitate fighter aircraft. These are peacetime operations to hone your skills,” explained a scientist privy to the development of Abhyas. The drone has the capability to cover the distance of 400 kilometers.

The flight test, which was conducted from the Interim Test Range, Chandipur in Odisha, was tracked by various radars and electro-optic systems. It can simulate a range of aircraft and missiles, as well as radar, infra-red and visual threats.

Official said Indian forces are spending a huge chunk of its budget to import aerial target drones to sharpen the air defence mechanism. A leading British firm exports such aerial targets to the three services and the DRDO as well. The DRDO officials claimed that one system of Abhyas, including the ground support, would cost around 40 lakh while the imported platform of aerial target costs close to Rs 1 crore.

Scientists pointed out that Abhyas can be used to do away with the post-launch recovery mode for Indian Navy, which is time-consuming and difficult in a scenario as the sea. It is used for defensive training of surface-to-air missile crews against anti-ship missiles and for development testing and evaluation of air defense systems.

But, Abhyas is much more than an aerial target. While making presentations before the three services last week in South Block, the DRDO scientists have conveyed that they do not see it for a narrow perspective.

“If intelligently used, Abhyas can cause huge damage to the enemy by its multiple applications. It is a very good aerial asset,” said P.S. Krishnan, former director, ADE, who has launched the Abhyas project.

“Abhyas has multiple applications. Its Radar Cross Section is increased 50 times to imitate a fighter jet. It also has a potential to be converted into a high speed subsonic missile. It can act as a decoy and also function as a jammer platform,” a scientist explained while adding that, “It is capable to carry warheads. But in its present form Abhyas is not meant for that. But in near future, it can be used depending upon your requirement.” The services can launch it with the help of a laptop anywhere.

With GPS, it has become more accurate and can even hit a window of a building. It is an armed missile once you put a warhead. With development of Abhyas, India has become the only nation to have such high-end multiple use drone technology in the sub-continent.

“In Balakot air-strike, the IAF had to risk its man and machine while trying to divert attention of Pakistan air- defence. But, with the induction of Abhyas into the services, such situations can be tackled with,” a DRDO official said.

It all started in 2012 when a group of six scientists wanted to convert the tow-body of a recoverable Lakshya-Pilotless Target Aircraft into an expendable self-propelled aerial target. The inspiration was that they had identified a mini gas turbine engine which fits inside the diameter of the tow-body. “The tow-body which is toed by a mother aircraft can be self-propelled,” said a scientist, involved in its development.  He further explained that soon a launcher was made to launch Abhyas by intelligently adapting the 68mm rocket being manufactured by the Ordnance factories. And soon a wing was integrated and it was launched without the engine.

The project was, however, not without problems. “Being a miniaturised bird, it is required not only a mini engine but also a micro navigation system. After all initial hiccups and extensive simulations, Abhyas was successfully flown on May 13, last month,” he proudly added.

A low-cost target is a requirement of the armed forces. The project was sanctioned with an initial funding of Rs 15 crore. But the project picked up pace after the three services floated a global tender for procurement of 225 HEAT drone for its operational requirement in 2015.

“Abhyas was designed to be launched from a zero-length launcher by two 68mm rockets. It could fly upto an altitude of 5 kms and at a speed of 180 met/sec. It had an endurance of 45 minutes,” said the scientist.

However, little did the scientists know that that development was much beyond science and technology. It was not a national strategic project like Agni. Hence, to influence the top hierarchy to accord priority was a tough mission for the ADE scientists.

“Being a small bird, the accurate measurement of its centre of gravity and the booster thrust line was very important. The navigational sensors were MEMS (micro-electro-mechanical systems) based and posed its own limitations although it offered advantages of space and weight,” another scientist explained.

After its successful launch, the DRDO will now select a private firm as developer and production partner.