All the aircraft Russia unveiled at MAKS 2019 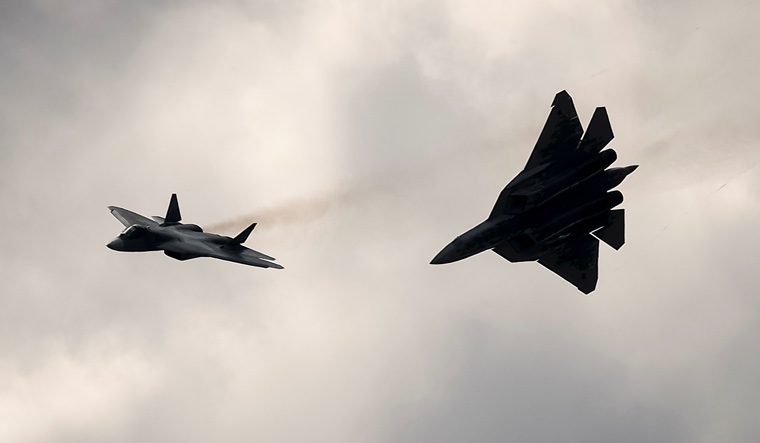 Russia’s premier international air show, the Mezhdunarodnyj Aviatsionno-kosmicheskij Salon (MAKS) kicked off at the Zhukovsky International Airport near Moscow on August 27, with several of the country’s latest and greatest aircraft on display.

The airshow is usually seen as Russia’s attempt to market its wares for foreign purchases with President Vladimir Putin welcoming this year’s chief guest of honour, Turkish President Recep Tayyip Erdoğan, as part of Russia’s hopes to sell its fifth-generation stealth Su-57E fighter to Turkey.

At the 14th edition of MAKS, many of the aircraft on display are being or once were offered to India, including the Su-57 and the MiG-35. However, this air show notably lacked a prominent Indian presence, with military analyst and ex-IAF pilot Vijainder K. Thakur citing a “near absence of Indian presence or participation” at the show.

The airshow also included a commercial aircraft produced by the United Aircraft Corporation (a merger of Sukhoi, Mikoyan, Irkut, Ilyushin, Tupolev and Yakovlev), the MC-21, which Russia hopes to market as an alternative to Boeing and Airbus passenger aircraft.

Here are the planes that Russia exhibited at the air show. 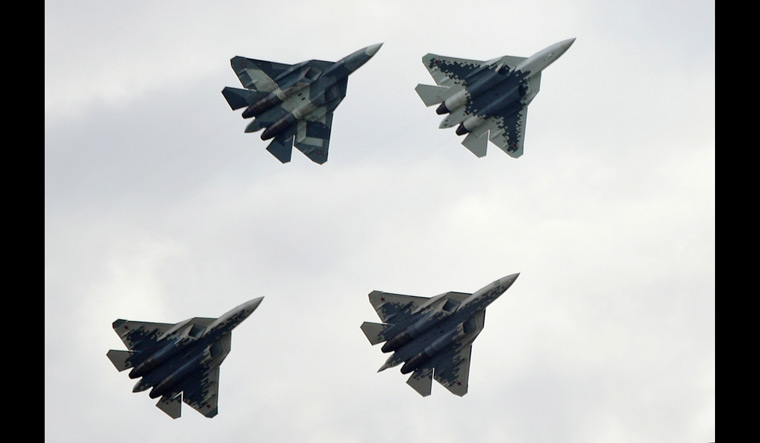 The Su-57 is a super-manoeuvrable, stealthy, fifth-generation multirole fighter that rivals the American F-22 and the Chinese J-20.

India and Russia had initially planned to collaborate on an India-specific variant of the Su-57 dubbed the Fifth Generation Fighter Aircraft (FGFA), with India desiring numerous upgrades including indigenous systems and a twin-seater configuration. Later, the Indian Air Force (IAF) expressed reservations about the capabilities of the Su-57’s engines as well as about it stealth characteristics. In 2018, the then Defence Minister Nirmala Sitharaman announced that India had told Russia to “go ahead with the project and we (India) may join it at a later stage”.

On Tuesday, Russian officials said that the deal had not been cancelled, but that the delay had taken place on the Indian side. Victor N. Kladov, Director of International Cooperation and Regional Policy of Russian state corporation, Rostec, told reporters at MAKS international air show, “We have never ever cancelled any agreement with the Indian government. Fifth generation (fighter aircraft) project has been delayed by the Indian side, not by the Russian side.”

India’s stance has been to wait until the aircraft is inducted into service with the Russian air force before making a move, with Air Chief Marshal B.S. Dhanoa saying so in July. India had an initial projected requirement of 214 FGFA.

Turkey is in talks with Russia to purchase the Su-57, with Erdoğan becoming the first world leader to peek into the fighter’s cockpit. Turkey was earlier a part of the United State’s own Joint Stealth Fighter (JSF) programme for the F-35. However, Turkey was barred from buying the aircraft in July after refusing to cancel an order for the Russian S-400 missile defence system.

More Su-47 Berkut Photos at MAKS2019! I really like this unique Design! 😎 pic.twitter.com/5AL0WTSHKs

Only one Su-47 was ever built, and it was on static display at MAKS-2019. The distinctive forward-swept wing design was an experiment at attaining unparalleled manoeuvrability when it first flew in 1997. Several of the technologies featured on board the Su-47 ‘Berkut’ were later implemented in the Su-35BM and Su-57.

The forward-swept wing design allows the aircraft to take on far higher angles of attack. This benefit was later developed through the use of thrust-vectoring, allowing regular swept-wing designs like the F-22 to achieve similar results. In the Russian fleet, the addition of canards and thrust vectoring to the Su-30 aircraft allowed similar capabilities. In addition, the design places greater strain onto the airframe and results in an aerodynamically unstable frame. As a result, the Su-47 never left the experimental stage.

The United States had also experimented with a forward-swept wing design in 1984 with the Grumman X-29. The design was not carried forward into later-developed planes.

The Su-47 was first debuted at MAKS in 2007, then as the S-37. This year marks the first time in 12 years that the fighter has been exhibited, albeit in the form of a static display.

Scale model of what the final/production version of the #Okhotnik UAS will likely look like. Note the new narrow exhaust port with top and bottom V-shaped edges. New exhaust port will improve rear-aspect stealth (lower IR & radar signature). Model will be on display at #MAKS2019. https://t.co/OqoH1V6BXB

A stealthy, heavy, unmanned combat aerial vehicle (UCAV), the S-70 is a sixth-generation aircraft that Russia is betting on to compete with the likes of the Northop Grumman’s X-47B. The project grew from Mikoyan’s ‘Skat’ design and is currently powered by the same AL-31 engines that feature in the Su-27 (and Su-30MKI).

Aviation writer Tyler Rogoway of The Drive has speculated that this could affect its stealth characteristics, and that Russia is likely to swap out the engine for a stealthier configuration in the future. The S-70 is believed to be able to deploy most of the missiles that can currently be equipped onto the Su-57.

With the Okhotnik still under development, no offer has yet been made to India for it. India is already pursuing its own indigenous UCAV programme with the DRDO AURA. In addition, India is in talks to purchase weaponised drones from the USA (the Predator) and has already issued an order with Israel for its Heron drones.

The MiG-35 was originally offered to India as part of India’s now-defunct Multi-Role Combat Aircraft (MRCA) competition for 126 air craft. Since the deal fell apart, Russia has remained keen to sell the aircraft to India.

A heavily-upgraded version of the MiG-29, the MiG-35 adds an AESA radar and, in one variant, 360-degree thrust vectoring. In July, IAF Air Chief Marshal Dhanoa inspected the jet in Moscow and proclaimed it a “completely new aircraft”, but added that due process had to be followed and a tender issued before it could be considered.

In 2015, Egypt signed a $2 billion deal for 50 MiG-35s. Peru, Myanmar and Bangladesh have also reportedly expressed interest in the aircraft according to TASS. 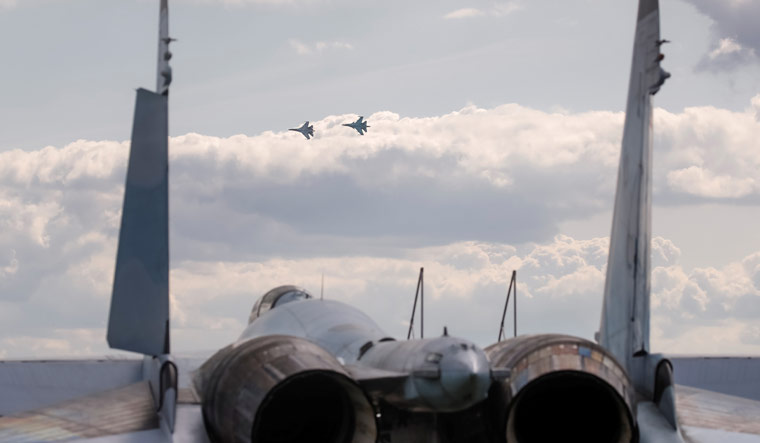 The Su-35s is similar to the Su-30MKI in that it is a heavily upgraded version of the Su-27. It features some improvements from the Su-30MKI, including a more efficient engine (the AL-41), an AESA radar and a larger internal fuel tank. However, the differences are not significant enough to warrant a purchase, and India has not expressed interest in buying the Su-35S.

China and Indonesia have purchased the Su-35s, with the UAE and Egypt expressing interest for a future purchase. 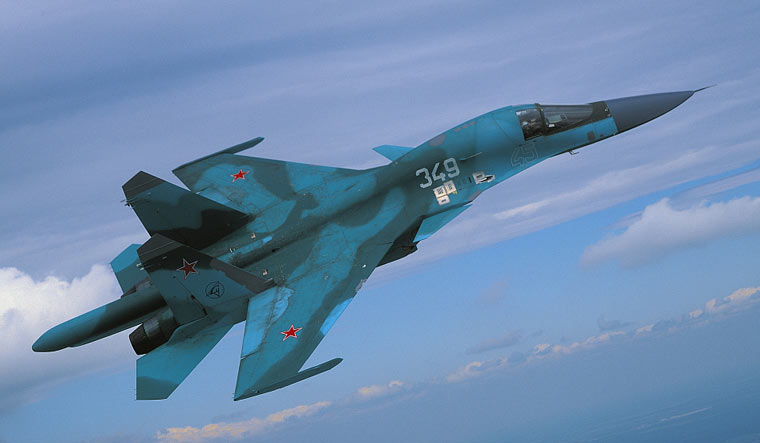 A strike fighter variant of the Su-27, the Su-34 is a medium-range fighter-bomber used for deep-strike missions. Its cabin is far more spacious than those of the Su-27 and Su-30, allowing pilots to conduct long-duration missions in relative comfort.

It was deployed in Syria and is capable of both air-to-air and air-to-ground warfare. According to Aviation Week, Russia is exploring making an electronic-warfare variant of the Su-34.

Considered the successor to the Mi-17 in the medium heavy-lift helicopter segment, the Mi-38 entered service with the Russian Air Force in 2015.

The Mi-38 was exhibited at Aero India 2017, with Air Chief Marshal Dhanoa expressing interest at the time, according to TASS. 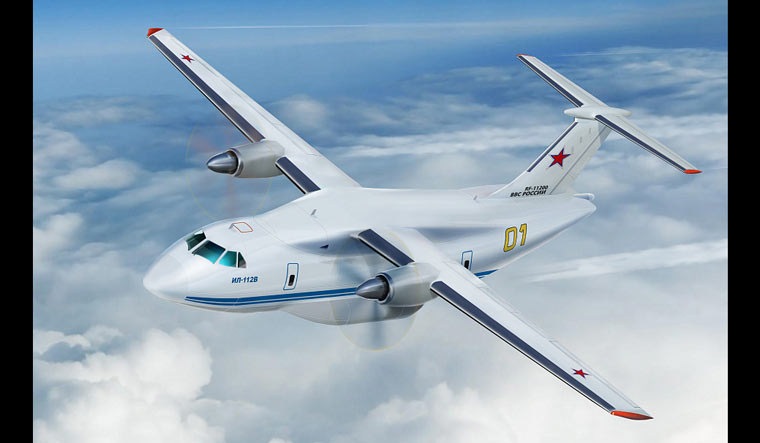 A light military transport intended to replace the An-26, the Il-112 is designed for adverse weather conditions. Janes reported that it was offered to India in 2016 to replace the Avro-748. It has also been marketed as a replacement for the ageing Soviet-era An-32. 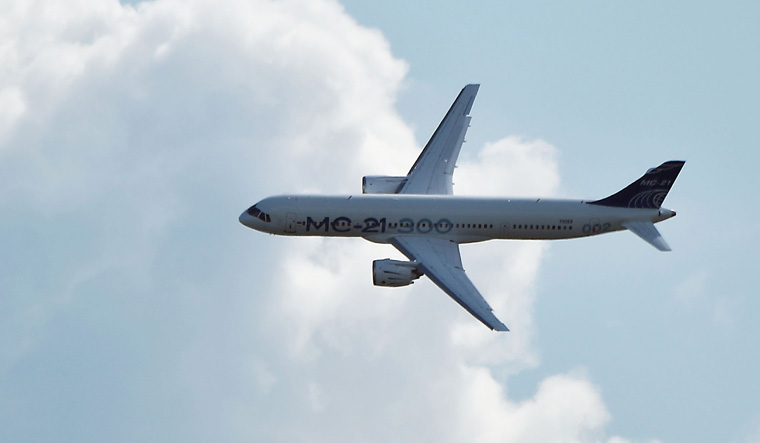 Billed as a cheaper alternative to on average 20 percent cheaper than its direct competitors" in the medium-haul range, news agency Interfax quoted Ravil Khakimov, head of its manufacturer Irkut, as saying. The MC-21 was displayed at MAKS 2019 with an eye on the $191.1 billion global commercial aircraft market (figures by GlobalData).

Believed to compete with the Airbus 320 and Boeing 737, the MC-21 could be about 20 per cent cheaper than its competitors according to Irkut head Ravil Khakimov, as reported by Interfax. 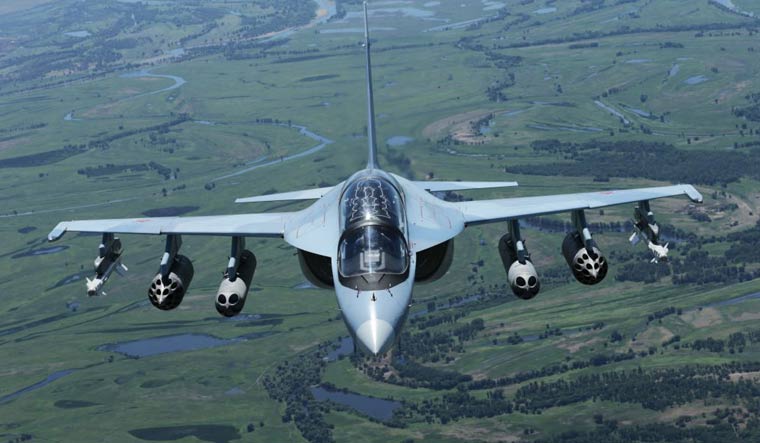 A light subsonic combat trainer, the Yak-130 can be weaponised to for light-attack duties with a payload of up to 8,000 kgs. Capable of replicating characteristics of 4++ generation jets like the Su-35 and MiG-35, it was offered to India to fill in the IAF’s requirements for an advanced trainer.

IAF Air Chief Marshal Dhanoa flew the Yak-130 while on a visit to Russia in July.