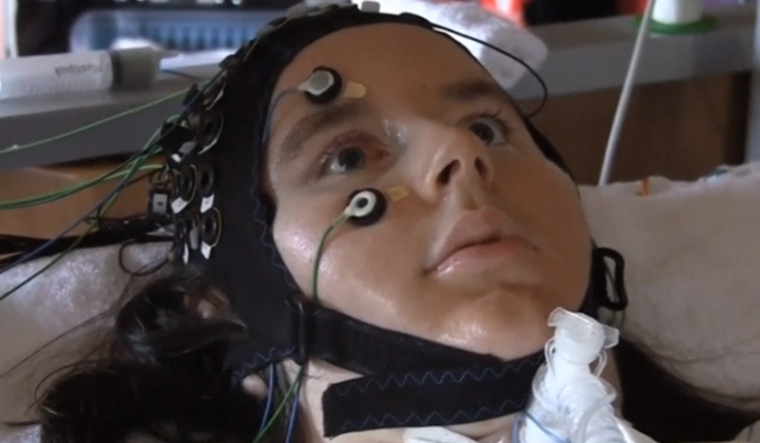 Scientists have developed a brain-computer interface (BCI) that can enable people with paralysis to operate an off-the-shelf tablet device just by thinking about making cursor movements and clicks.

Tablets and other mobile computing devices are part of everyday life, but using them can be difficult for people with paralysis.

In a study published in the journal PLOS ONE, three clinical trial participants with tetraplegia were able to navigate through commonly used tablet programmes, including email, chat, music-streaming and video-sharing apps.

Using an investigational BCI that records neural activity directly from a small sensor placed in the motor cortex, the participants messaged with family, friends, members of the research team and their fellow participants. They surfed the web, checked the weather and shopped online.

One participant, a musician, played a snippet of Beethoven's "Ode to Joy" on a digital piano interface.

"In this study, we've harnessed that know-how to restore people's ability to control the exact same everyday technologies they were using before the onset of their illnesses. It was wonderful to see the participants express themselves or just find a song they want to hear," said Jaimie Henderson, from Stanford University in the US.

The BCI includes a tiny implant that detects the signals associated with intended movements produced in the brain's motor cortex. Those signals are then decoded and routed to external devices.

Researchers using similar technologies have shown that the device can enable people to move robotic arms or to regain control of their own limbs, despite having lost motor abilities from illness or injury.

Two of the participants in this latest study had weakness or loss of movement of their arms and legs due to amyotrophic lateral sclerosis (ALS), a progressive disease affecting the nerves in the brain and spine that control movement. The third participant was paralysed due to a spinal cord injury.

All were enrolled in a clinical trial aimed at assessing the safety and feasibility of the system.

For the study, neural signals from the BCI were routed to a Bluetooth interface configured to work like a wireless mouse. The virtual mouse was then paired to an unmodified Google Nexus 9 tablet.

The participants were then asked to perform a set of tasks designed to see how well they were able to navigate within a variety of commonly used apps, and move from app to app.

The participants browsed through music selections on a streaming service, searched for videos on YouTube, scrolled through a news aggregator and composed emails and chats.

The study showed that participants were able to make up to 22 point-and-click selections per minute while using a variety of apps.

In text apps, the participants were able to type up to 30 effective characters per minute using standard email and text interfaces.

"It was great to see our participants make their way through the tasks we asked them to perform, but the most gratifying and fun part of the study was when they just did what they wanted to do -- using the apps that they liked for shopping, watching videos or just chatting with friends," said Paul Nuyujukian, a bioengineer at Stanford.