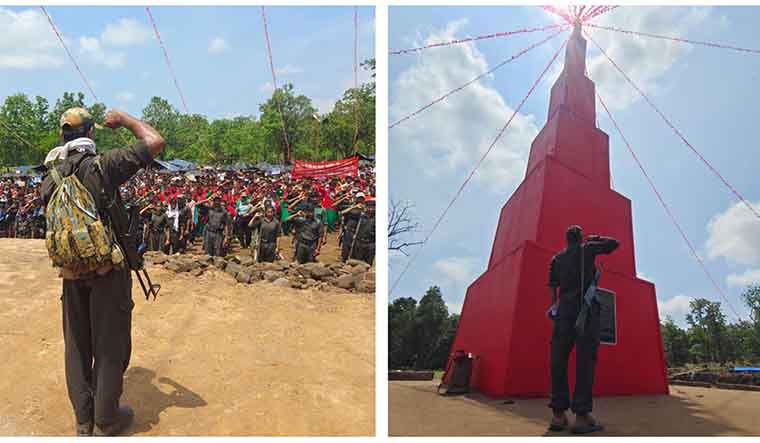 Maoists managed to organise a major event on the conclusion of ‘shahidi saptah’ (martyrs’ week) on August 3 in the Bastar region in Chhattisgarh, despite the increased surveillance and reach of the security forces.

In an area bordering Sukma and Bijapur districts in Chhattisgarh, close to the Telangana border, Maoists erected a 64-feet memorial for their top leader Akkiraju Haragopal aka Ramakrishna who died in October 2021, and other dead leaders. According to local sources, 10,000-12,000 villagers participated in the event, which was also attended by reward-carrying top cadres of the Maoists from Telangana.

Bastar IG Sundarraj P. told THE WEEK that the event was nothing unusual and was part of a four-decade-old modus operandi of the Maoist leadership. He said that in the past few years, the Maoist influence has declined considerably in the Bastar region, yet there were some “security vacuums” that the forces were trying to eliminate.

The event, a culmination of a week–long observance from July 27 to August 3, continued for around 10 hours, sources said.

Photographs and videos of the event, including the memorial and the local people and members of the Chetana Natya Manch (CNM) – the troupe of the Maoists flanked with heavily armed cadre in a long winding rally that was part of the event, were released by the Maoists. Some local journalists were also allowed to ‘cover’ the event.

Local news portal ‘CGImpact.org’ shared some photos and videos of the event with THE WEEK.

The event and the preparations, including construction of the memorial, have put a question mark on the claims of the security forces that the Maoists had been pushed back in the region.

“Every year, between July 27 and August 3, Maoists observe martyrs’ week. They gather villagers in their strongholds and try to influence them with their ideology and also misguide them about various issues. They try to organise similar events during Women's Day, Maoist formation day, Bhoomkal Diwas etc. This is the typical modus operandi of the Maoist leadership for the last four decades,” said Sundarraj.

“But, in the last few years, the area under Maoist influence has declined considerably. We have opened up more than 43 camps in the last three years and, therefore, the reach of administrative machineries and security forces have increased even in the erstwhile stronghold area of Naxals.

“Still there are few areas of security vacuum in south Sukma, south Bijapur, Indrawati National Park Area, Abhujmaad etc. where Naxals conduct such meetings and force villagers to participate in those meetings. Since the native population in those areas is left with no other option, they attend those events for fear of their lives and properties,” the IG said.

“But the native population has realised the real and ugly face of Maoists and hopefully, in the next couple of years, they will be freed from the clutches of the illegal and banned Maoist outfit,” Sundarraj said.

Meanwhile, a villager was killed in Balaghat district by Maoists on suspicion of being a police informer. Local police said on Saturday that the villager has been identified as Lalu Dhurve of Malajkhand and the Maoists took away his body after killing him. Efforts were on to recover the body. Sources said that a handwritten note, apparently by the Maoists, taking responsibility of the killing, was found from the spot of murder. The note also warned the police to stop using local people as informers by luring them with money, and the villagers that they will meet the same fate (as Dhurve) if they tried to become police informers.