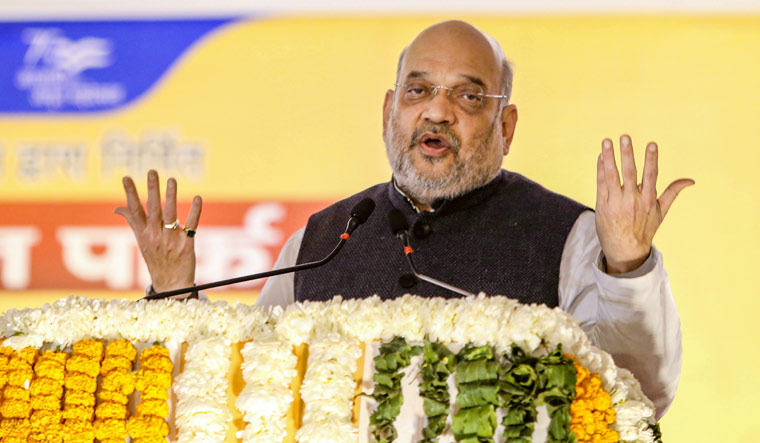 On a day when the Congress staged protests across the country against rising inflation and in the wake of the Enforcement Directorate questioning Sonia Gandhi, Rahul Gandhi and Mallikarjun Kharge in connection with money laundering allegations in the National Herald case, Home Minister Amit Shah alleged that the agitation was a subtle message against Ram temple foundation-stone laying by Prime Minister Narendra Modi on August 7, 2020.

The home minister questioned the grand old party's decision to wear black clothes during the protest.

“Congress chose this day for protest and wore black clothes because they want to give a subtle message to further promote their appeasement politics because on this day itself PM Modi laid the foundation of Ram Janambhoomi,” news agency ANI quoted him saying.

Further, questioning the timing of the protests, Shah observed that the ED has not summoned any of the Congress leaders on Friday, and no raids too have happened on this day. However, the party chose to hold the protests today.

He claimed that the issues raised by the Congress like the price rise and ED raids are only excuses to hold the protest on this day.

The home minister asked the Congress to be "responsible" and cooperate with the ED investigation. "The matter is going on the basis of complaints that have been filed. As far as ED is concerned, everybody should respect the law and order situation in the country."

More than 60 Congress MPs were detained in Delhi and released six hours later. Former Congress chief Rahul Gandhi, Priyanka Gandhi Vadra, K.C. Venugopal, Adhir Ranjan Chowdhury and Gaurav Gogoi were among the MPs detained and taken away from Vijay Chowk, outside AICC headquarters and other places in the national capital.

"Congress MPs have just been released after being detained for almost 6 hours for protesting peacefully and democratically against price rise, unemployment and GST," Ramesh, who had also been detained, tweeted.