Fifth such incident reported in the state this year 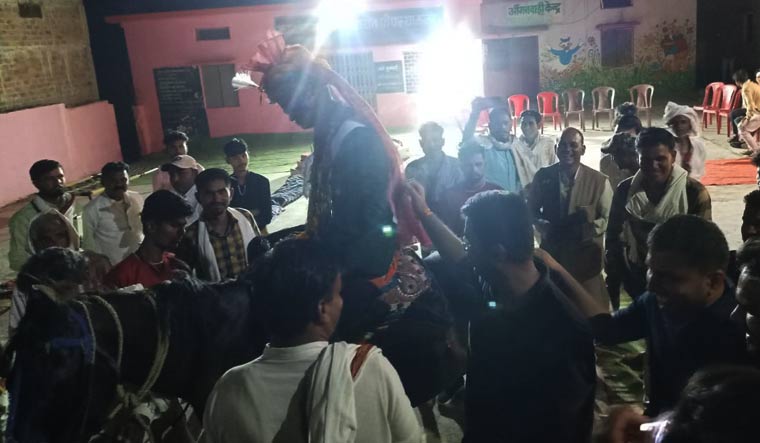 Five persons were arrested and 17 others booked as a marriage ceremony of a dalit couple was disrupted in a village in Rajgarh district on Sunday night over the issue of the groom riding horse and using DJ in the marriage procession.

This is at least the fifth incident in Madhya Pradesh this year when dalit grooms were forbidden to ride horse during the marriage ceremony and police had to intervene to get the rituals completed.

Interestingly, the latest incident was reported from Piplaya Kala village that had become famous after Chief Minister Shivraj Singh Chouhan ate ber fruit (Indian plum) from the hands of a tribal woman there in January.

On Sunday night, a group of villagers reportedly belonged to the 'upper caste' uprooted the tents put up for the ceremony and refused to let the marriage procession of the groom, Rahul Meghwal of Patan Khurd, enter the village. They also disconnected power supply to the dalit settlement.

Tear gas shells were fired to disperse the villagers after they pelted stones at the police personnel. On Monday, arms licences of eight villagers were cancelled, superintendent of police (SP) of Rajgarh Pradeep Sharma told THE WEEK.

The procession was later taken out and the ceremony was conducted in presence of a large posse of police in the wee hours of Monday, district collector Harsh Dikshit and SP Pradeep Sharma said. “The groom rode the horse and the procession was taken out as per his wishes. The marriage rituals were conducted at the girls’ home and the other arrangements were made at the panchayat building. The situation is fully under control in the village now,” the SP said. The send off of the bride was also conducted on Monday morning.

Earlier on February 12, a similar incident of disruption of a marriage ceremony that was later conducted in police protection had been reported from Kachnariya of Rajgarh district and 11 persons were arrested. Other incidents were reported from Sagoriya in Damoh on April 4, Sarsi village in Neemuch district on January 27 and Kundalpur of Chhatarpur district on February 9. In the Chhatarpur incident, the groom was a police constable and the senior police and district administration officials had ensured that he rode the horse on the next day of the marriage, while taking the bride back. The constable had been made to alight from horse and walk to the marriage venue due to pressure of ‘upper caste’ villagers, it was reported.