Security personnel were injured in stone pelting at Madanpur Khadar 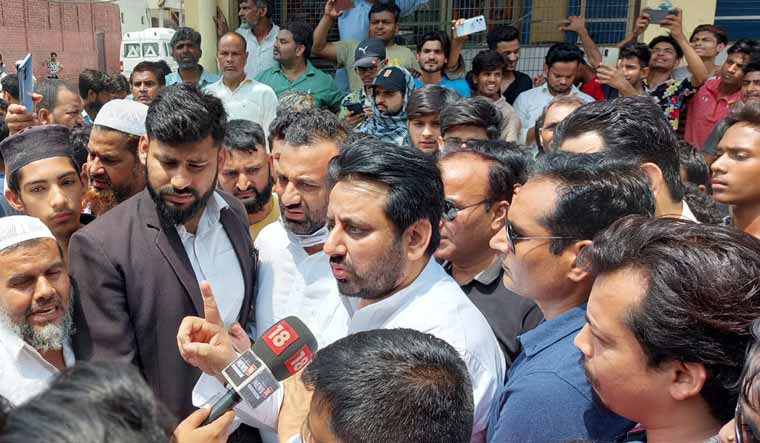 Protests erupted in the Madanpur Khadar area under the South Delhi Municipal Corporation on Thursday during an anti-encroachment drive by the civic body with people pelting stones at security personnel leaving a few injured, police said.

Aam Aadmi Party (AAP) MLA Amanatullah Khan, who was part of the protest, has been detained along with others, they said.

Khan, however, alleged that the Delhi Police arrested him. “Delhi Police has arrested me. Can imprison me, not my spirits,” he tweeted in Hindi.

A senior police officer, however, said, “We have detained AAP MLA Amanatullah Khan and others who protested against the drive along with supporters and locals. We have made adequate security arrangements to ensure no untoward incident takes place.”

Security personnel were seen wearing helmets and carrying batons to disperse the crowd during the protest.

Civic authorities carried out anti-encroachment drives in various parts of Delhi, with local residents and AAP supporters staging a protest in Madanpur Khadar to stop the demolition of structures, which they claimed were legal.

AAP MLA Amanatullah Khan reached Kanchan Kunj in Madanpur Khadar and started protesting against the drive along with supporters and local residents, with some of them raising anti-BJP slogans.

The fresh actions are part of anti-encroachment drives by the civic bodies since mid-April.

An FIR has already been lodged against Amanatullah Khan and his supporters for allegedly obstructing an anti-encroachment drive in Shaheen Bagh.