Rajnath reiterates call to US arms makers to make in India

Had met executives of US defence majors Boeing and Raytheon 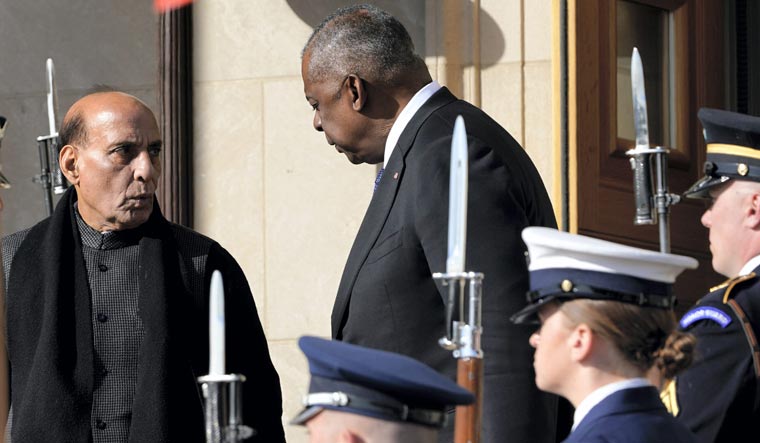 Rajnath told mediapersons at a joint press conference “I have talked to American companies for Make in India and aerospace and world programmes. I have invited them for these programmes.” He told ANI he had appealed to US defence companies to co-develop and co-produce products in India.

Rajnath claimed the US “responded positively” on India's policy of Atmanirbharta (self-reliance). Rajnath told ANI “I have appealed to the American people, their companies, equipment manufacturers that they are welcome in India while calling upon them for co-development and co-production in India.”

Earlier on Monday, Rajnath Singh had met executives of US defence majors Boeing and Raytheon after reaching Washington DC.

Reiterating India's foreign policy priorities, Rajnath said “America is our natural ally, no two ways about it... We want to maintain good ties with all the countries.”

On Monday, India and the US signed a space situational awareness arrangement that will support greater information sharing and cooperation in space.

Austin said “We're also deepening our cooperation in cyberspace, including through training and exercises later this year. And we're expanding our information-sharing partnership across all warfighting domains... For example, we're committed to launching new defence space exchanges later this year between our Space Command and India's Defence Space Agency.”