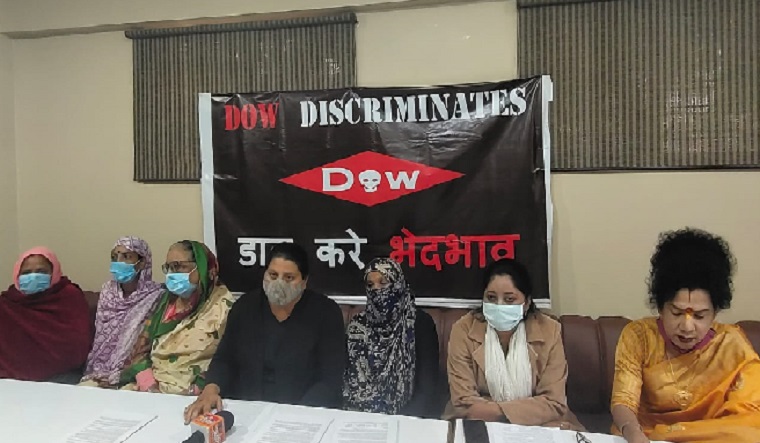 Bhopal gas tragedy survivors address media on the eve of the 37th anniversary of the disaster. Sanjan Singh on extreme right

Senior LGBT+ activist from the UK, Peter Tatchell and Bhopal activist Sanjana Singh who is also a gas tragedy survivor, have called upon Jim Fitterling, the CEO of The Dow Chemical Company, USA, to walk his talk and not discriminate against survivors of the worst industrial disaster of the world.

Fitterling came out as gay in 2014 and is a vocal advocate of the community. He is also on advisory boards of LGBT+ rights organisations.

Dow is the current owner of the Union Carbide Company that had a fertiliser plant in Bhopal. It was from this plant that deadly methyl iso-cyanate (MiC) gas leaked just after midnight of December 2, 1984, killing thousands and maiming lakhs for life. Many of the survivors succumbed to the effects during the course of years afterwards.

Survivors grapple with long-term health and economic impacts of the disaster and even their second and third generations face congenital health issues.

Singh addressed the media on Thursday on the eve of the 37th anniversary of Bhopal gas disaster along with representatives of four survivors' organisations. A four-page strongly worded letter written by Tatchell to Fitterling was also released to the media.

The activists and the survivors' organisations have called upon the Dow company through its CEO to own up its responsibilities to stand legal trial in the criminal case, give enhanced compensation to the survivors and remediate the toxic waste in and around the abandoned factory site in Bhopal that continues to pollute water, soil and air in the vicinity and cause serious health impacts for the survivors and their next generations.

In his letter to Fitterling, Tatchell reminds the CEO of his vision to end discrimination in all forms.

“As CEO of Dow you have described a similar vision. You said recently 'when we see injustice and inequity, we cannot be silent. We must stand up and speak out.' You say, most importantly, that Dow is 'taking action to accelerate change and address racism, inequality, and injustice'. You add that 'overcoming hundreds of years of systemic racism will require a holistic approach and long-term action from all of us.'

I agree with your sentiments, and would like to add that the best place to begin such action is with that which is within our power to remedy. It is currently within your power, Jim, to remedy 50 years of racism, inequality and injustice in Bhopal,” Tatchell says in his long letter.

Singh said, “Fighting discrimination against LGBT+ people teaches us to fight against all forms of discrimination in society. It is wrong for Fitterling who came out as gay in 2014 to make claims of inclusivity while heading a company that starkly discriminates against the Bhopal survivors.”

Rachna Dhingra of the Bhopal Group for Information and Action said that in the United States Dow submits unquestioningly to government agencies and courts. “In 2005 a Dow joint-venture plead guilty and paid an 84 million dollars criminal fine for participating in an international conspiracy to fix the prices of synthetic rubber in violation of the Sherman Act. In India, Dow has ignored six separate summonses to appear in the court’s proceedings in the disaster claiming that Indian criminal courts have no jurisdiction over Dow. Dow Chemical’s double standards are evident in every aspect of their operations.” she said.

Meanwhile, in his letter Tatchell attracted attention of Fitterling to the multifarious issues of Bhopal survivors that the Dow is answerable to and urged him to take action.

“Human decency, Jim, demands you send your subsidiary Union Carbide to court, so that people who have suffered inhumanly for longer than most in their country have been alive might see some truth, reconciliation, and restitution in what remains of their lives.

Decency demands you accept India’s petition for further compensation to meet the reality of this endless disaster, and so do what you can to ease the suffering of those your company has condemned to a life of pain and despair.

Decency also demands you end the poisoning of yet more innocents in Bhopal, ensure your company’s mess is cleaned up and compensate those already irretrievably harmed.

You need to do all of these things, Jim, and you need to do them now. As you say yourself, 'If you want to make a difference in the world—you have to take action. Words won’t cut it.'

I am hoping that you will be the Dow CEO who puts things right for the people of Bhopal,” Tatchell concludes in his letter.