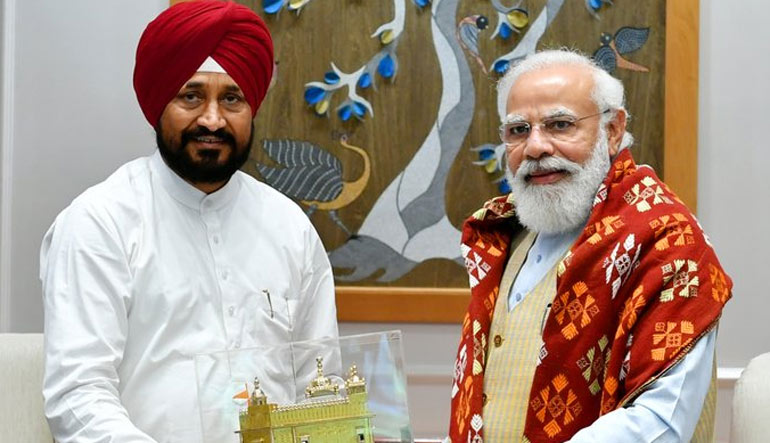 A day after Parliament passed a bill to repeal the farm laws, Punjab Chief Minister Charanjit Singh Channi, on Tuesday, wrote to Prime Minister Narendra Modi demanding a complete waiver of the debt of farmers and farm labourers.

Channi also said his government is ready to share with the Centre a part of the cost of debt waiver.

He said farmer leaders had recently met him in Chandigarh with their demands and only one major issue that remained pending was that of farm debt. "With your announcement of revoking the three farm laws, the farmers and the government have moved a step closer to resolving some major pending issues which have taken centrestage along with the demand to repeal three farm laws. The foremost of these being agricultural debt," said Channi in his letter to the prime minister.

There is a ray of hope after the government of India's changed stance, he wrote.

"Prime minister sir, the farmers of Punjab are the ones who picked up the gauntlet of food security of the nation and became the bulwark of the green revolution. The filled godowns of today testify their relentless toil...

"However, while ensuring food security our farmers driven by self-pride got crippled under the weight of a mountain of debt. When they toiled on the soil, their sons defended the sensitive borders with their lives."

India is indebted to these sons of the soil, he said.

"I am of the firm opinion that this great nation, which they have served for decades, now owes a moral obligation to shake its inertia and completely write off agricultural debt, including that of farm labourers."

The chief minister said no banking or non-banking institution should knock the doors of "our farmers or farm labour for recovery of agricultural loans which forms the root cause of suicides by them and stress in the rural economy."

"I, therefore, extend an invitation to you to accept my proposal of complete waiver of farmers' and farm labourers' debt. My government is ready to take over our share of this burden of debt along with the Government of India."

"A Centre-state shared scheme of an appropriate ratio spread over some time with proper modalities needs to be framed to handle this issue and end the debt of our farmers and farm labourers once and for all."

The chief minister stressed that despite the stressed revenues of the state government, "no sacrifice would be big enough than the weight of this moral obligation that we owe to farmer fraternity".

"Let us make a fresh start and work towards improving the entire ecosystem of agriculture in Punjab in particular and the nation in general. We as stakeholders are ready to commit ourselves to any new arrangement that is decided mutually between all the stakeholders."

Pointing out that some people will "question us with economic sheets in their hands", Channi said, "But sir do remember that tomorrow when neither you nor I would be here then we will be judged. There will be a reckoning."

"Let history judge us by our deeds and that when the moment of reckoning arrived, we did not shudder with fear but boldly turned the tide."