ISKCON stages protests across globe against attacks on Hindus in Bangladesh 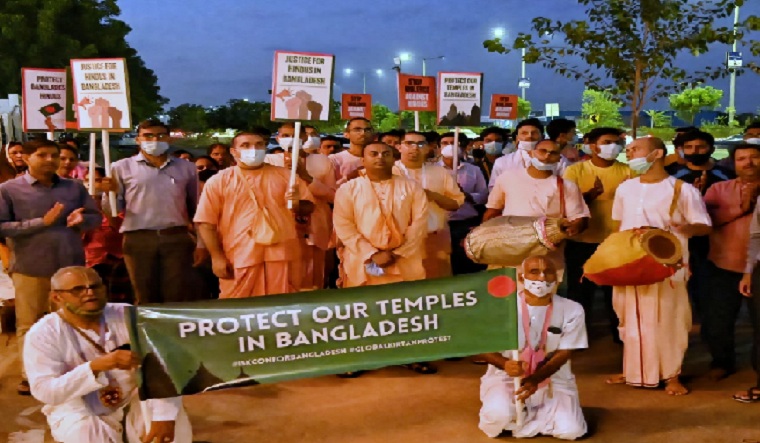 Members of the International Society for Krishna Consciousness (ISKCON) on Saturday staged protests by chanting the 'Hare Krishna' mantra at their international headquarters in West Bengal's Mayapur and 149 temples across the globe against the recent attacks on Hindus in Bangladesh.

Last week, many Durga Puja pavilions and Hindu temples and homes across Bangladesh were attacked and vandalised, including an ISKCON centre in Noakhali, and several people killed in violence that erupted over alleged blasphemy at a marquee in Comilla.

At Mayapur, thousands of devotees and monks performed 'Harinam Sankirtan' or congregational chanting during their protest and displayed placards that carried messages such as 'Justice for Bangladesh', 'Protect our temples in Bangladesh' and 'Stop violence against Hindus'.

Later, they prayed for those who lost their lives in the violence.

"ISKCON devotees participated in a worldwide peaceful demonstration of pain and grief of the global Hindu community, which stands in solidarity with the Hindus of Bangladesh. They also demanded that the Sheikh Hasina government ensure safety and justice to the minorities in that country," ISKCON Mayapur media spokesperson Subroto Biswas said.

ISKCON Mayapur co-director Subekshana Das, a devotee from Poland, flayed the attacks and demanded that the Bangladesh government take tangible action against the perpetrators.

Similar protests were held in Kolkata, where devotees also lit candles in front of the photographs of two ISKCON members who lost their lives in the violence in Noakhali, vice-president Radharaman Das said.