Gujarat goes to polls in the second half of 2022 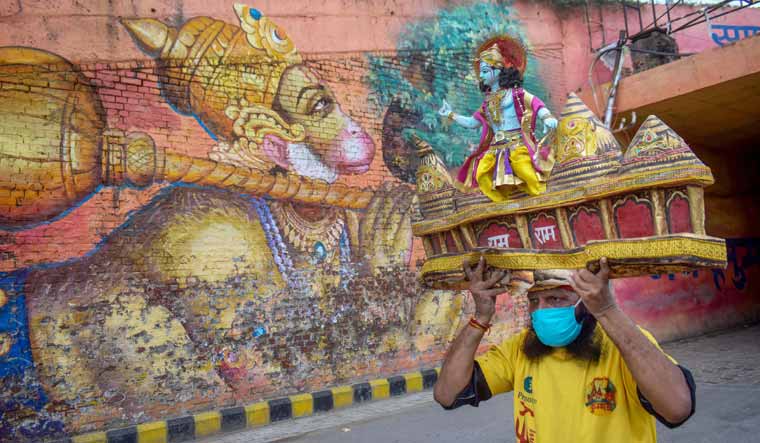 (File) Representational image. A worker carries a model of Ram Mandir on his head on the eve of the foundation stone laying ceremony of the temple in Ayodhya | PTI

If you are a tribal and from Gujarat, then you have all the more reason to visit Ram Temple at Ayodhya.

Gujarat government has decided to give Rs 5,000 to tribals visiting the temple in Uttar Pradesh.

This was announced by Tourism and Pilgrimage Development Minister Purnesh Modi while addressing a gathering at the Shabari Dham in the tribal-dominated Dangs district. Legend has it that Shabari, who offered berries to Ram after tasting them herself first, stayed there. The programme was organised on Dussehra.

Modi also announced that an annual state-level Dussehra festival will be organised at different places associated with Ram.

The move is seen as an attempt by the ruling BJP to influence the 14 per cent tribal votes. Gujarat goes to polls in the second half of 2022 for 182 seats in the assembly.

Tribals have traditionally voted for the Congress. However, over the last few years, they have started voting for the BJP.

The saffron party, however, is in no mood to take any chances, especially with Arvind Kejriwal-led Aam Aadmi Party also jumping into the fray. AAP has already announced it will contest all the 182 seats.

The tribal belt in Gujarat stretches from Ambaji in the north to the Dangs in the south.

In the state assembly, there are 35-plus seats where more than 40 per cent electorate are tribals.

Much of the Ram Janmabhoomi movement had begun from Gujarat. The then BJP president L.K. Advani had begun his Ram Rath Yatra from Somnath on September 25, 1990.

Coincidently, the architect of the Ram Temple, Chandrakant Sompura, is also from Gujarat.