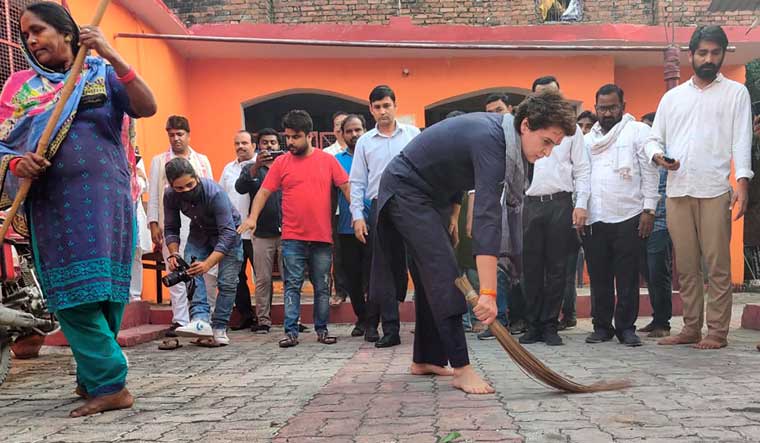 Congress leader Priyanka Gandhi Vadra on Friday paid a surprise visit to a dalit locality in Lucknow and picked up a broom, reacting to CM Yogi Adityanath's dig at her for sweeping the floor at the Sitapur guest house where she was detained.

Taking on the chief minister for his "casteist comment", Priyanka later in a tweet announced that all district committees of the party will clean Valmiki temples on Saturday.

In a reply to a query over Gandhi's act of sweeping the floor during her detention, Adityanath earlier in the day had said people want them to be fit only for this and they reduce them to it (janata unko usi layak banana chahti, aur usi layak bana diya).

These people have no work except spreading nuisance and negativity, he said during a programme at a private TV news channel.

In response to the chief minister's remark, Gandhi descended on a dalit colony and picked up a broom, saying it is a symbol of simplicity and self-respect.

While mingling with inhabitants of Luv Kush Nagar, the Congress general secretary cleaned the premises of a Maharshi Valmiki temple there, saying crores of women and sanitation workers in the country use brooms daily for cleaning, a Congress spokesman said. She also prayed at the temple.

Priyanka also told people, "He has not humiliated me by saying so, he has humiliated you all as crores of dalit brothers and sisters are safai karamcharis and they do this work."

"I have come here for the cleaning work along with you all and let Yogiji know that cleaning and using a broom is an act of self-respect," she said.

"Today, the chief minister of UP showed his anti-dalit mentality by giving a casteist statement. Tomorrow, all district Congress committees of UP will clean the Lord Valmiki temples. India will not tolerate the insult of crores of Dalits and women of the country," Priyanka said in a tweet tagging a video of her cleaning a premises in the dalit colony.