A total of 18 persons have been arrested in the case, including Aryan Khan 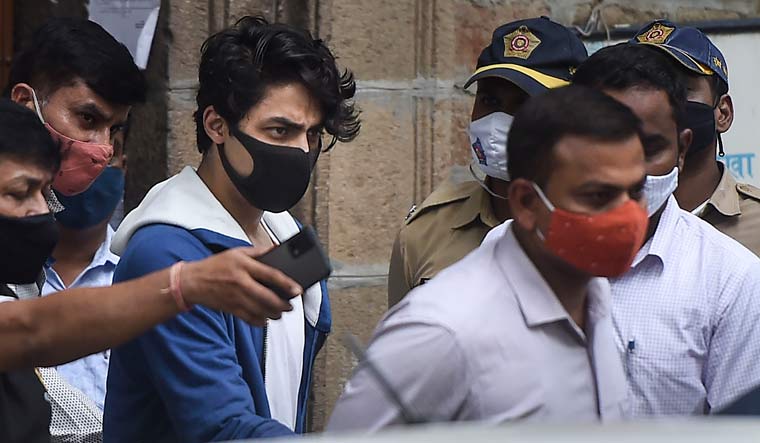 Bollywood actor Shah Rukh Khan's son Aryan Khan being taken to Arthur Road jail from Narcotics Control Bureau office after being arrested in connection with the alleged seizure of banned drugs from a cruise ship, in Mumbai | PTI

The Narcotics Control Bureau (NCB) on Saturday said all the allegations levelled against the agency in connection with the cruise ship raid and alleged recovery of drugs, in which Bollywood actor Shah Rukh Khan's son Aryan Khan was arrested, are "baseless, motivated afterthoughts and prejudicial".

NCB Director, Mumbai Zone, Sameer Wankhede said the anti-drugs agency works professionally. "We do not see any political party and religion. We do our job professionally," he added.

Based on a tip-off, an NCB team raided the Goa-bound cruise ship last Saturday and claimed to have recovered banned drugs. A total of 18 persons have been arrested in the case, including Aryan Khan.

The incident took a political turn when Nationalist Congress Party (NCP) leader and Maharashtra minister Nawab Malik on Wednesday claimed that the raid was "fake" and that "outsiders" were involved in it.

On Saturday, Malik alleged that the NCB had initially detained 11 persons from the Goa-bound cruise ship, but let off three of them, including the brother-in-law of BJP leader Mohit Bharatiya, a couple of hours later.

A senior NCB official told mediapersons on Saturday that the two men, whom Malik had claimed as "outsiders" involved in the raid, were actually among the nine independent witnesses involved in the operation. He said the duo was not known to the NCB before October 2, when the raid was conducted.

NCB Deputy Director General Gyaneshwar Singh told reporters that such statements are based on conjecture and assumptions.

"These assumptions are frivolous and malicious in view of documents and records of procedures duly followed by the NCB that can subject to legal verification. The NCB reiterates that its procedure has been and will continue to be professionally and legally transparent and unbiased as all the suspect/accused persons have been treated at par and in accordance with the law," he said.

When asked about allegations, Singh said he will not comment on what other people are saying about the NCB.

"The NCB is a responsible organisation. Whatever we say, we say it based on the proofs and evidence. We are doing our work honestly and dedicatedly," he said.

Singh said independent public witnesses are mandatorily required to be present during any seizure operations as per the set legal procedure.

Malik had claimed that a man named (KP) 'Gosavi', who is seen escorting Aryan Khan in one of the videos, was not an NCB official, and his social media profile states that he is a private detective based in Kuala Lumpur.

He had also said that two men were seen escorting Arbaaz Merchant, also arrested in the case, in another video, and one of them is a member of the BJP, (later identified as Manish Bhanushali).

Singh said the NCB strongly adheres to the legal procedure and involves at least two independent witnesses in all its seizure operations.

"As the operations are conducted on a real-time basis, so the field verification of independent witnesses is not possible as the main focus is on drug recovery," he said.

Singh said a total of nine independent witnesses were involved in the whole operation (cruise ship raid) and Manish Bhanushali and KP Gosavi were among them. "None of the Independent witnesses, including the two (Bhanushhali and Gosavi) were known to the NCB before October 2," he said.

Later in a statement, Singh said a total of 14 persons were brought to the NCB zonal office (in Mumbai) for examination.

"All of them were served notice under section 67, examined thoroughly and their statements were recorded," Singh said.

Eight persons were arrested and the remaining six persons were let off since no incriminating evidence was found against them, he stated and added that the other six "can be associated if the need arises in the investigation as per law".

As panchnamas were made at the respective spots, hence the place, timing, situation and resources may differ, he added.

Singh stated that these documents are a matter of court record and have been produced in the court and will be part of a charge sheet in future. "Hence all such documents are part of a transparent legal procedure open to scrutiny at appropriate fora," he added.

Meanwhile, Sameer Wankhede said those are the independent witnesses.

"Whatever they (who are raising allegations) want to say let them say. We will speak before the court," he said without taking any names.

Wankhede said the case is sub-judice and the investigation is underway. The NCB will follow the orders of the court, he added.

"The NCB is an independent and professional agency. We did not see any political party and religion and we do our job professionally," he added.

On Friday, a metropolitan magistrate's court in Mumbai rejected bail applications of Aryan Khan and two others, following which he was sent to the Arthur Road prison.