As IAF inaugurates highway for fighters, does Sweden offer lessons? 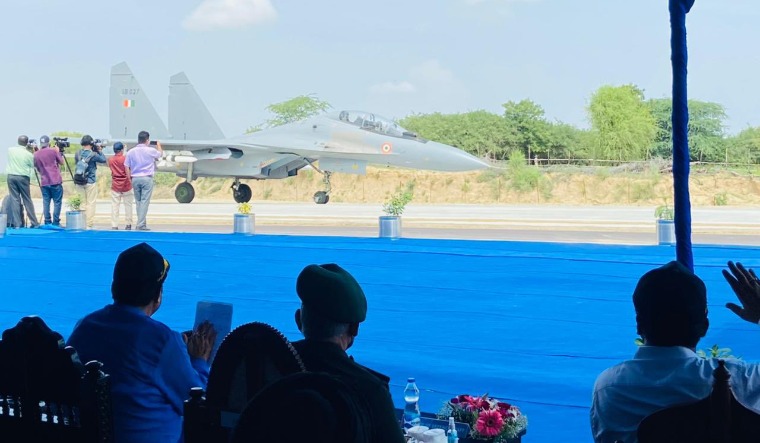 Defence Minister Rajnath Singh and Road Transport and Highways Minister Nitin Gadkari arrived at a stretch of National Highway 925 in Rajasthan on Thursday and made history.

The two ministers arrived at the highway on the Satta-Gandhav stretch, landing on a C-130J transport aircraft of the Indian Air Force.

Interestingly, the Su-30MKI was also serviced on the highway.

The National Highways Authority of India (NHAI) has developed the 3km section of Satta-Gandhav stretch of NH-925 as an emergency landing field for the IAF. In October 2017, fighter jets and transport planes of the IAF had conducted mock landings on the Lucknow-Agra Expressway to show that such highways can be used by the IAF planes for landing in case of an emergency.

Previously, stretches of expressways have been used to test landing strips for fighter aircraft.

Why highways as runways matter

While airpower has dominated nearly all conflicts since the First World War, airbases and aircraft on the ground have remained targets vulnerable to attack. Arguably, the most famous conflict where destruction of airbases decided the fate of a war in hours was Israel's attack on airbases of Egypt, Syria, Jordan and Iraq in the Six-Day War in 1967.

'Dispersing' aircraft around the country to operate off runways, thus, becomes a necessity. However, merely, being capable of landing an aircraft and allowing it to take off from a road will not be enough to fulfil military objectives in a conflict. Aircraft need to be serviced, refuelled and re-armed, which warrants training and deployment of technicians and logistics personnel to operate under a variety of circumstances.

Speaking about this on News 18, retired Indian Air Force air vice marshal Manmohan Bahadur said "You would have seen the Sukhoi (Su-30MKI), after landing, was being serviced and would have taken off. That's the good thing that has been done... because just making an airstrip on a road does not complete the project... when you have to activate an airstrip, a lot of work goes into activating an airstrip."

The need for operational flexibility is exacerbated by China stocking up its arsenal of ballistic missiles and cruise missiles capable of attacking airbases.

A number of countries practise 'dispersed' operations including Switzerland, Taiwan, Israel, Pakistan and Sweden. In particular, the Swedish Air Force has been considered a pioneer in dispersed operations. While a non-aligned nation, since the 1950s, Sweden built a strong air force given worries about the intentions of the Soviet Union. All Swedish fighter aircraft built since the 1950s—the Saab J-35 Draken, J-37 Viggen and JAS-39 Gripen—were designed to be capable of operating from highways.

The rationale behind using highways was explained by the website of the Aeroseum aircraft museum in Gothenburg as "Having so many widely dispersed bases meant it would be impossible for an aggressor to know exactly where all the aircraft would be located at any particular time and it would thus be impossible to destroy every aircraft in a surprise attack."

Saab highlights the Gripen's capability to operate off runways, including refuelling and rearming in less than 10 minutes. "Gripen E can take off in strips of road that are only 16m wide 500m long and can land in a 600m long road, without any tailhook or brake chute. This capability also allows the fighter to take off from small taxiways, small civil airfields or highways. A Gripen can also taxi using its own power to flightline positions for maintenance, refuelling and rearming, with the help of limited crew members. Gripen was designed for a minimal turnaround time—tasks like refuelling and rearming do not take more than 10 minutes, further increasing the operability and availability of the fighter," claims Saab.