After US Navy, LCA trainer variant offered to Australia: HAL 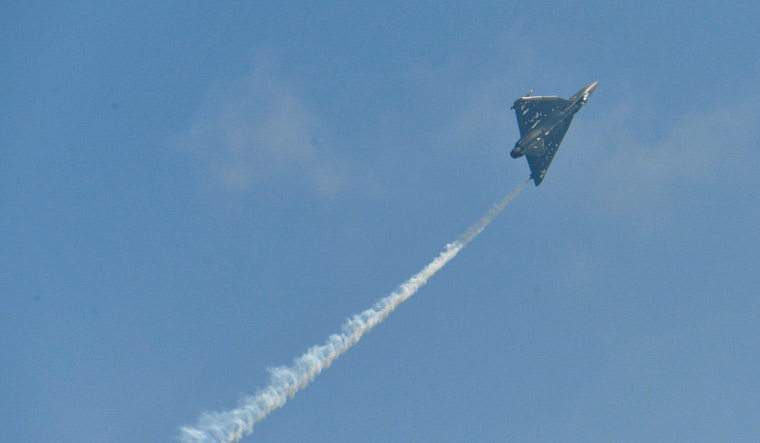 Since it clinched a Rs 48,000 crore deal to manufacture 83 LCA Tejas fighters for the Indian Air Force, HAL has been confident about the indigenous jet's prospects on the export market.

In August, HAL chairman R. Madhavan claimed India stood a "good chance" of bagging a deal from Malaysia to supply 18 Tejas fighters to fulfil the Southeast Asian country's requirement for light fighters. In Malaysia, HAL is competing with offerings from manufacturers in the US, China, Russia and Europe.

HAL is continuing to pursue other avenues to sell the Tejas. At the end of August, HAL released its annual report for 2020-21.

In the section dealing with 'exports', HAL mentions that it had offered the LCA in a "lead-in fighter trainer (LIFT) configuration" to the Australian Department of Defence in July 2020.

The section also mentions the trainer variant of the Naval LCA was offered to the US Navy in July 2020.

In December last year, it was reported that HAL had responded to the US Navy's request for information for a new trainer to replace its fleet of Boeing T-45 Goshawks. The T-45 is a variant of the British Hawk trainer that was developed specifically for operating off aircraft carriers. LIFT is a niche category of trainer aircraft, which has more advanced electronics and greater manoeuvrability than offered by older advanced jet trainers. LIFT trainers can also offer training in air-to-air, missile defence and strike missions.

LIFT aircraft offer more realistic performance for trainee pilots who will graduate on to complicated multi-role fighters like the Rafale or F-35.

In December last year, Madhavan told The Economic Times HAL had done considerable work on the LCA LIFT version. "The same platform can be used to mimic any other platform. All that needs to be done is put in the flying characteristics, and things will change to the selected aircraft. For example, if… Rafale characteristics, to the pilot it will seem like he is flying Rafale, which will help in the advanced training process," Madhavan then told The Economic Times.

The Royal Australian Air Force currently operates a fleet of around 30 'Hawk MK-127' LIFT aircraft. The Hawk MK-127 is a variant of the Hawk trainer equipped with more advanced electronics to make it suitable for the LIFT role. The RAAF began inducting the Hawk MK-127 in 2001.

In August last year, the RAAF issued a request for information from companies to supply a new aircraft to replace the Hawk MK-127.

Boeing confirmed it had offered its T-7A Red Hawk trainer for the RAAF. The T-7A Red Hawk, developed with Sweden's Saab, is widely considered the newest trainer aircraft in development. The US Air Force will acquire around 350 T-7A jets. Italian company Leonardo also confirmed it was offering its M-346 trainer for the Australian requirement, while Korea Aerospace Industries was expected to pitch its T-50 trainer, which was co-developed with assistance from Lockheed Martin.

The T-50 and M-346 can fulfil the roles of both jet trainer and LIFT given their more advanced designs and electronics.

No real chance in US?

The T-7A, T-50 and M-346 are all competing to replace the T-45 in the US Navy. US experts have said the LCA LIFT variant does not stand a realistic chance of winning the US Navy contract. This could be in part attributed to the fact that HAL lacks orders for the type. In comparison, both the M-346 and T-50 have won several export orders in the past decade.

In addition, the LCA's delta-wing design makes it less suitable for low-speed landing characteristics that naval pilots need on aircraft carriers. Moreover, the lack of US companies as partners is also expected to complicate HAL's bid.