All the 80 ghats of Varanasi are under water 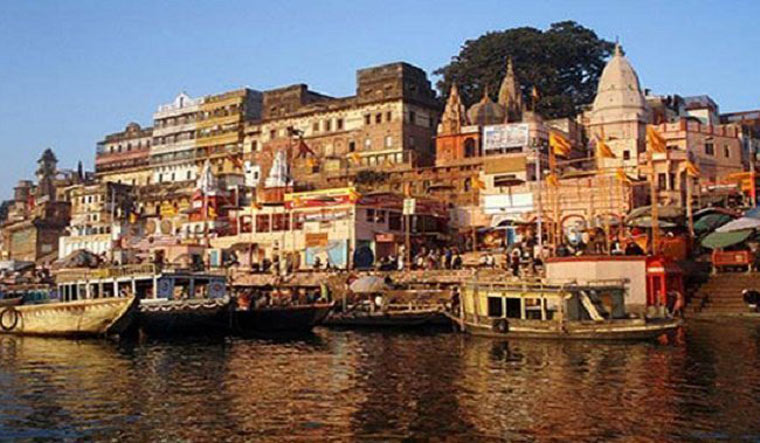 As the water level in the Ganga breached the danger mark in Varanasi, the dream pier development project of Prime Minister Narendra Modi, at Khidkiya ghat, has been swamped.

At 4pm on August 11, the Central Water Commission put the present water level at the Ganga at 72.1 metres. This is above the warning and danger level flows. The highest ever river flow, recorded in September 1978, was 73.901 metres.

All the 80 ghats of Varanasi are under water. Even the ghats where the cremations take place are flooded. So, final rites have been moved to the lanes adjoining the ghats.

At the Khidkiya ghat, two helipads, a CNG station and two platforms have been submerged. The under-construction spur and a seven-kilometre-long canal, over which experts had raised questions, have also been swept away.

All the above are adjuncts to a larger project, stretching from Haldia to Varanasi - the National Waterway 1, which is purported to provide an alternative mode of environment friendly and cost-effective transport. It’s total cost is Rs 5,369 crore and the project is to be completed by March 2023.

The showcase Khidkiya ghat project at Varanasi includes restaurants, a water sports centre and an amphitheatre. The foundation for the project was laid in November 2020 by Modi. Khidkiya ghat, not as popular as the other ghats, stands by the Rajghat bridge, and the project is expected to draw tourists.

Experts have questioned the wisdom of building such a massive project on the flood plain.

Pratik Ranjan Chaurasia, a minor irrigation expert, said, “When you encroach a flood plain for residential or commercial purposes, there is always the danger that the embankment used to contain the river will be swept away by the force of water. The rapid pace of climate change means that events which happened once in 1,000 years will now be happening more frequently.”

A floodplain is a flat area along the river which normally overflows seasonally. Such plains can be small or huge. When the river waters recede from such areas, they leave behind sediments that enrich the soil and hence yield good agricultural produce.

‘Climate Change 2021’, a recently released report by the Intergovernmental Panel on Climate Change, has warned that India will see an increase in annual mean precipitation which will lead to more severe monsoons and thus flooding.

India, till date has only a draft notification on River Regulation Zones. On Prohibited Activities Zone, the draft notes: “This zone extends from the river bank to the outer edge of the floodplain and beyond. The limit will be extended up to 500 meters from the highest flood level in the past 50 years. These zones are the area which are subjected to frequent flooding and are most vulnerable to adverse impacts of human activities”.

'River centric urban planning guidelines', a 2021 report of the Ministry of Housing and Urban Affairs, says that floodplains in Indian cities are ‘very much exposed to unauthorised construction which has taken place without preparation and approval of layout plans’.

‘Built up paved areas on the flood plains are…responsible for reducing the absorption of water into the ground and increasing runoff. Reduced flow along the embankments has led to utilization of urban river plains for residential, commercial and recreational purpose thereby interfering with the ecological functions of the river. Flood plains are encroached upon by various means and are also used as landfill sites, leading to degradation of overall river ecology,” says the report.

Tinkering with the natural course of a river can be disastrous.