The cabinet expansion had triggered disgruntlement among BJP's old-timers 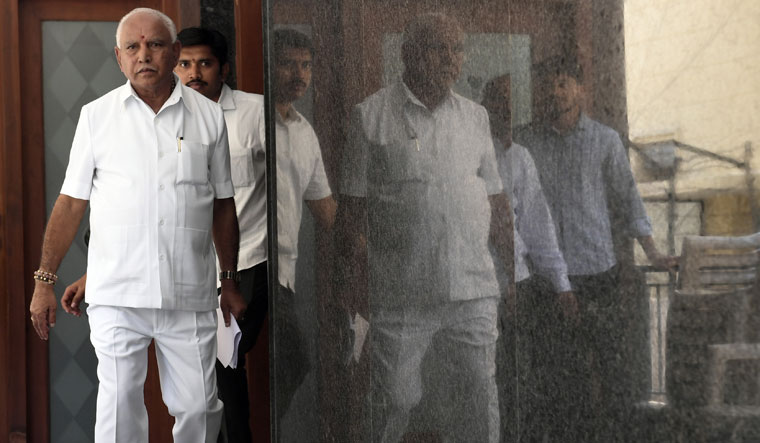 Speculations over replacement of Chief Minister B.S. Yediyurappa has caused intrigue in the political circles, but the indications of a major overhaul and a younger cabinet, has sure caused the jitters to not just veteran leaders in the Yediyurappa cabinet but also the "migrant" ministers who jumped ship from the Congress and the JDS to help install a BJP government two years back.

In July 2019, 14 Congress and three JDS rebel MLAs had resigned, causing the collapse of the JDS-Congress coalition government. Subsequently, they were disqualified by Speaker Ramesh Kumar for “anti-party activities”. After the Supreme Court’s nod to contest the bypolls, the BJP gave tickets to only 13 rebels to contest the bypolls (held on December 5, 2020), while denying a ticket to former ministers R. Shankar (Ranebennur) and Roshan Baig (Shivajinagar).

Athani MLA Mahesh Kumatalli, was the only ‘defector’ MLA to be left out of the cabinet as the Belagavi region was already represented by deputy chief minister and fellow Lingayat leader Laxman Savadi in the cabinet. Subsequently, R. Munirathna won the R.R. Nagar assembly seat, but was not given a cabinet berth. A.H. Vishwanath (Hunsur) and M.T.B. Nagaraj (Hoskote) who lost the bypolls were made MLCs and only Nagaraj was inducted into the cabinet.

The cabinet expansion had triggered disgruntlement among BJP's old-timers who had been denied berths. That had caused a rift within the party.

The "defector MLAs" who won a politically-charged bypoll on the BJP symbol, found a place in Yediyurappa's cabinet, with many even getting a portfolio of their choice. But the winds of change in the BJP have brought the party-hoppers to a peculiar situation.

With the exit of Yediyurappa as the chief minister, the migrant ministers' brigade can no longer stake claim to a cabinet berth nor hard-bargain for a preferred portfolio if inducted into the new cabinet.

On Thursday, even as the reality of a BJP post Yediyurappa's exit dawned on them, at least six ministers - Sudhakar, Patil, Hebbar, Basavaraj, Gopalaiah and Nagaraj rushed to the CM's chamber to voice their concerns. Each of the ministers holding a letter in hand also triggered rumours of their resignation.  However, Yediyurappa chose to remain non-committal and reiterated that he would abide by the party high command's diktat, and reportedly advised the ministers to do the same.

"We came to the BJP accepting Yediyurappa's leadership and also the party ideology. We will abide by the decisions of the party high command," said Health Minister Sudhakar after his meeting with the CM.

Agriculture minister Patil expressed his annoyance over people labelling them as "migrants" and "outsiders" saying, "We all have been elected on the BJP party symbol and we are very much part of the BJP now."

The ministers also dismissed rumours of their resignation, saying that the cabinet would be dissolved once the chief minister stepped down. "We are not crazy or foolish to resign. If the CM steps down, the cabinet gets dissolved. Why should we resign on our own," asked the ministers.

For the party-hoppers, the "ghar wapsi" might not be a politically prudent move as they might not be taken seriously by the electorate. More importantly, the party cadres would not support the MLAs, especially when the senior leadership is divided over taking them back into the party fold.

KPCC president D.K. Shivakumar has been sending feelers to the defectors saying, anybody wanting to come back should submit their applications (to the screening committee). He also claimed many are wanting to return to the party.

Taking a contrarian stand, Leader of the Opposition Siddaramaiah reiterated that the "defectors" were not welcome to the party. "I have said it on the floor of the assembly and I am saying it again that none of the defectors will be taken back into the party."