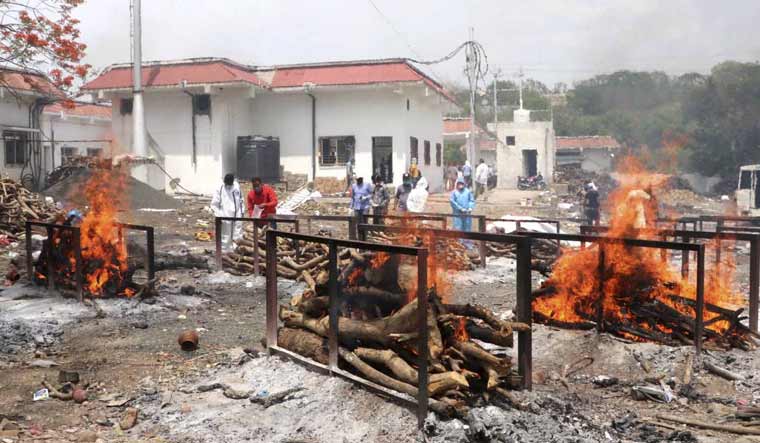 Bhopal: Cremation of COVID-19 victims amid surge in the coronavirus cases, at Bhadbhada crematorium in Bhopal, Saturday, April 24, 2021 | PTI

Madhya Pradesh on Monday night released a ‘backlog’ COVID-19 death figure of 1,478, causing its death toll due to the pandemic to cross the 10,000-mark. The total COVID-19 deaths reported in MP are now at 10,506 with an overall death rate of 1.33 per cent, a state health department bulletin showed.

This bulk death data released at one go caused the national single-day COVID-19 death toll to touch 2022 even as the lowest single-day spike in cases was reported on Monday in the country. In Madhya Pradesh, only 18 new cases were reported in the past 24 hours.

The health department bulletin released Monday night says that the ‘backlog’ deaths were added after district authorities updated the figures in the proper format on the centralised web portal Sarthak. The districts, through a letter on June 26, had been asked to update those deaths--that could not be reported earlier in the proper format (using form 3-A)--on the portal.

The health department said that of the ‘backlog’ deaths--762 were reported by different private hospitals, 508 from government hospitals in different districts, and 208 home isolation patients.

Questions have been continuously raised over the alleged underreporting of COVID-19 death figures in the state with some reports claiming that the actual death figures were up to 23 times higher than those reported. The Congress, led by former chief minister Kamal Nath, has also raised the issue several times claiming that information available with them suggested at least 1.5 lakh deaths in the state.

The MP Congress attacked the state government over the ‘backlog’ deaths, too. In a tweet, the Congress said: “In MP, there is a backlog of even deaths – figures of deaths up by 1,478 in a single day. Earlier deaths were in hands of Yamraj (Hindu God of death), but now the department has been taken over by Shivraj (CM Shivraj Singh Chouhan). What if Yamraj takes away anyone’s life, the approval will be given only by Shivraj at his own will.”

Meanwhile, the state government has decided to further lift COVID-19 related restrictions, allowing markets, hotels, and restaurants to open for full time in full capacity, as the new cases have shown a sharp decline. Also, the number of those allowed to attend weddings and funerals has been increased to 100 and 50 respectively. Cinema halls will be allowed to operate at 50 per cent capacity, chief minister Shivraj Singh Chouhan announced after a review meeting on Monday night.

Former CM Kamal Nath sounded caution over the decision to open up, saying in a tweet that one should remember that only 5.2 per cent of the population in the state has received both doses of vaccine. “The message of the government is clear – people should take care of their own lives. So take care of yourself and your family,” the tweet said.