In Damoh district, 40 per cent of the girls are married off before reaching 18 years 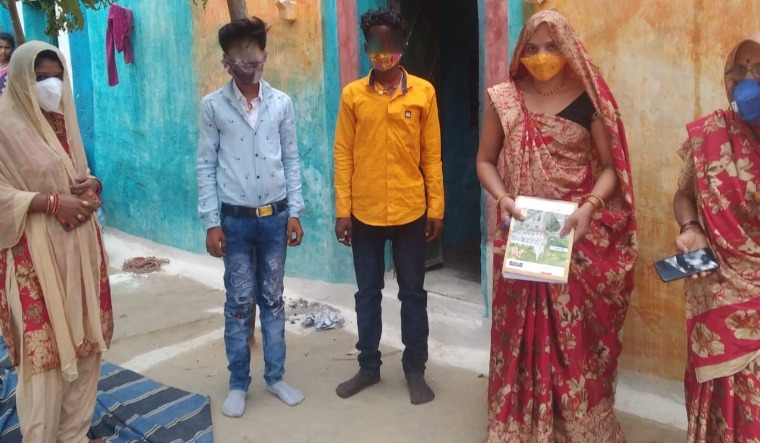 Two boys whose marriages were prevented in Damoh | Supplied

On a typically hot day in the third week of April, a 15-year-old girl hesitantly walked into the Patera block project office of the department of women and child development (DWCD) in Damoh district of Madhya Pradesh. The frail girl then made a somewhat strange request to the officials present. She urged them to come to her home in a nearby village and convince her father to not solemnise her marriage scheduled for three days later.

Appreciative of the girl's courage, a team of the department along with some police officials and NGO volunteers approached her parents immediately. It did take some time, but the team managed to convince the family that the girl, belonging to the Lodhi community, was underage for the marriage and that she should be married off only three years later at the earliest. Also, the parents were convinced to allow the girl, a student of class 10, to study further as per her wish.

The prevention of this brave girl's marriage was among 27 such underage marriages that the Damoh district administration managed to stop in the month of April and first two weeks of May amid the raging second wave of COVID-19 pandemic.

Damoh is part of the Bundelkhand region where society is known for its patriarchal mindset and it is not a surprise that 40 per cent of the girls here are married off before the legal age of 18, according to the National Family Health Survey (NFHS)-4 data (data of underage male marriages not available). In rural Damoh, the figure is higher at 44.1 per cent.

Overall, in Madhya Pradesh, every one in three females (32.4 per cent) and males (31.2 per cent) are subject to underage marriage, according to NFHS-4 data.

But this year, Damoh is doing well on prevention. The district is part of an adolescent empowerment programme with focus on ending child marriages and violence against children. The programme is being implemented by the Department of Women and Child Development in collaboration with NGO Mamta and UNICEF across 16 districts of MP.

Under the programme, an alert network of field-level functionaries of various government departments, especially health, DWCD and education, government officials, police, paralegal and NGO volunteers has been developed and who played a crucial role in the process of preventing child marriages.

The Damoh district project officer of DWCD, Pradeep Kumar Rai, while speaking to THE WEEK said that under the UNICEF-supported adolescent awareness programme as well as the Beti Bachao-Beti Padhao programme and Rashtriya Kishor Swasthya Abhiyan (national-level adolescent health programme), a concerted campaign against child/underage marriages is being carried out.

“We have sensitised the field workers of various departments, and along with various government line departments and NGOs like Mamta and Child Line, we have managed to make the people aware on the issue of underage marriage and also create an alert and aware ground network where we get information of such proposed ceremonies. That is the reason we have managed to already prevent 32 underage marriages since January this year (5 in February) although we could prevent only 20 during the entire 2020,” Rai said.

He added that the COVID-19 pandemic poses a big challenge because, by government orders, marriage ceremonies are to be low key and limited affairs and therefore information is difficult to get. Yet, the network has been alert enough and in at least two cases in the past month, girls have themselves approached authorities to get their own marriages stopped.

District coordinator of NGO Mamta, Virendra Jain, told THE WEEK that during the past year, despite lockdown, field-level functionaries like anganwadi workers, ASHAs (health department field functionaries) and auxiliary nurses and midwives (ANMs) and others have been trained offline and online, so that their inherent fear about reporting proposed underage marriages could be done away with. “The field functionaries are local people who have knowledge of all local happenings but fear reporting child marriages due to possible community repercussions. We worked to do away with this fear and give them the confidence of the backing of government officials,” Jain said.

Margaret Gwada, chief of UNICEF, Madhya Pradesh, said that child marriage is a violation of the right of the child and is a challenge that can only be addressed if fought together. “In collaboration with the state of MP, CSOs like Mamta and with the adolescents themselves taking the lead in some places, some significant milestones have been achieved. It is encouraging to see adolescent empowerment initiative is yielding results. However, we all have a collective responsibility to further amplify efforts by working with the communities, increasing awareness on legal provisions and ensuring educational and skill development opportunities for girls,” Gwada said.

On the eve of Akshay Tritiya, Chief Minister Shivraj Singh Chouhan also called upon people to postpone marriage ceremonies and help to break the COVID-19 infection chain. He especially called upon citizens to refrain from underage marriages. “Do not destroy the future of children by engaging in ill tradition of child marriage,” Chouhan said.

Other community influencers also issued appeals against child marriages. Among them were Brajesh Chouhan, member of State Commission for Protection of Child Rights; K.G. Suresh, Vice Chancellor of Makhanlal University of Journalism; ex-minister Jaivardhan Singh of Congress and Neha Bagga, spokesperson of BJP.

On Thursday, around 80 media representatives from Indore, Dhar and other parts of Malwa region and students of journalism had joined in an online meeting organised by School of Journalism and Media, Devi Ahilya Vishwavidyalaya (DAVV), Indore and UNICEF on the theme 'say no to child marriage'. Dr Sonalee Nargunde, Head of Department of School of Journalism and Media, DAVV, and Advaita Marathe, Child Protection Officer and Anil Gulati, Communication Specialist, UNICEF, MP were the main speakers.