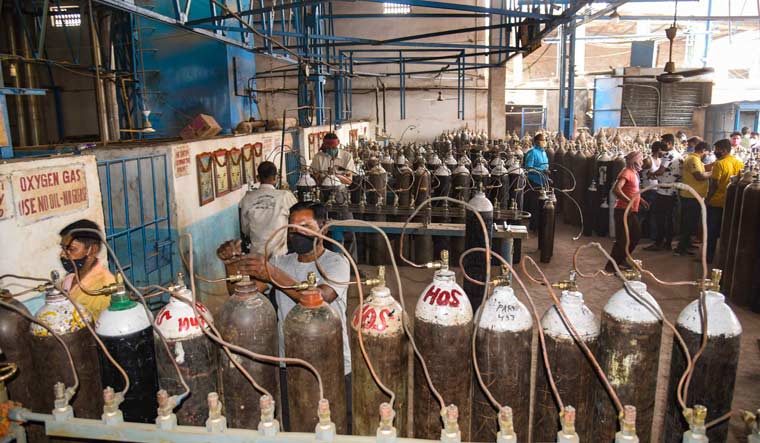 The Madhya Pradesh High Court has rapped the state government on the oxygen supply situation, observing that “the situation on ground is totally different than what was portrayed by the state government in the action-taken report about its efforts to continuously procure and provide oxygen to government hospitals as well as private hospitals”.

Further, the double bench of Chief Justice Mohammad Rafiq and Justice Atul Sreedharan, in an order passed as regards a suo motu petition of April 2020, have reiterated their directions of April 19 for the “state government to ensure regular and continuous supply of oxygen to all the citizens admitted anywhere either in government or private facilities”.

The High Court, in the order dated April 30, has taken on record several newspaper reports detailing as many as 74 deaths due to unavailability/disruption or low-pressure supply of oxygen during the month of April in various parts of the state (see figures below) and commented that “death of citizens, so large in number, is really heart-rending. It is a pity that people are dying in the hospitals due to lack of oxygen.”

“We do not know how far these data are correct, which may be a matter of enquiry... Even the State has not made any serious effort to dispute the veracity of the alleged deaths of several persons in the hospitals due to non-availability of oxygen,” the court further observed.

In a detailed order, the double bench also asked the state government to take a re-look at its Remdesivir distribution policy and rationalise it in such a way as to ensure the medicine becomes available to the common man at reasonable price.

The court also reiterated its April 19 directions on ensuring that private hospitals/nursing homes do not turn away patients falling under cashless schemes like Ayushman Bharat Scheme, the Deendayal Antyodaya Scheme and the Central Government Health Scheme.

The double bench asked the matter to be listed again at priority on May 6 to 'see further progress' (as regards its directions).

Going by the submission of the advocate general of Madhya Pradesh that the state government had sought additional allocation of 100 metric tonnes (MT) of liquid medical oxygen (LMO) from the Central government, the HC asked the counsel of the Central government to seek instructions (from GoI) as to why the quota cannot be so increased and why six more cryogenic tankers (apart from the currently promised six) cannot be made available to MP for timely transportation of oxygen.

The advocate general told the HC that LMO allocation increase has been sought since bed capacity of hospitals in the state in the month of May is likely to be increased to one lakh and requirement of oxygen would rise to 840MT.

“The right to life enshrined under Article 21 of the Constitution of India would be meaningless in the present situation without the continuous availability of oxygen. Here comes the role of State as a Constitutional obligation to provide for not only the lifesaving drugs but also the oxygen,” the court observed.

The court also made some scathing observations regarding the compliance of its previous orders.

“We are constrained to record that most of the significant directions issued by this court in its order dated 19.04.2021, mainly in respect of continuous and regular supply of oxygen and Remdesivir to the government as well as the private Hospitals/nursing homes, have not been fully complied. What has been contended before us is that most of the private hospitals are refusing to admit corona patients for the reason of non-availability of the oxygen and now with every passing day, it is becoming difficult for COVID patients to get admission either in the government hospitals or the private hospitals,” the order read.

As for distribution of Remdesivir injections to the private hospitals, the court said that it did not find any logic in the policy of the state government to provide the injections to only those patients who are on oxygen support.

“Whether or not a particular COVID-19 patient is required to be administered Remdesivir as medicine, should be left to the discretion of the treating doctors and ought not to be decided by the executive fiat. We see no justification on the insistence of providing Remdesivir to only such patients who are on oxygen support, particularly when oxygen, as a commodity, itself has become so scarce. There appears to be no logic behind this policy,” the court said. It then directed the government to have a re-look at the policy and rationalise it.

The state government was also asked to facilitate soft loans through nationalised banks for the private hospitals to set up their own air separator units to become self-sufficient in oxygen supply.

Reports of deaths due to oxygen shortage taken on record by the MP High Court: