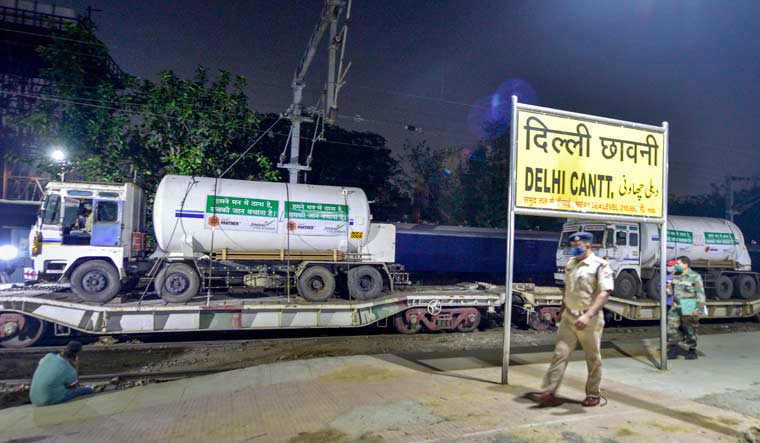 It is a chicken and egg situation in the National Capital that has resulted in a human tragedy this time as the COVID-19 pandemic claims hundreds of lives daily. As Delhi reels under oxygen shortage and desperate cries by hospitals to save patients, the Centre and Delhi government are sparring over who has mismanaged the supply of medical oxygen to hospitals.

The first issue flagged by Union home secretary A.K. Bhalla, in a recent letter to Delhi chief secretary Vijay Dev, is that despite being allocated 480MT of medical oxygen on April 21, Delhi received less supply than its actual allocation due to logistical issues that were not addressed by the Delhi government.

Second, he said that the Delhi government had directed one of the main suppliers of oxygen to supply 98 MT to 17 hospitals situated within Delhi while the same supplier was supplying 105 MT to 45 hospitals situated within Delhi for a long time. ''Alternate arrangements for the left out 28 hospitals were not properly tied up by the Delhi government. As a result, some of these hospitals have been complaining about severe shortage of medical oxygen and one hospital mentioned that some persons died because of it.”

''This could have been avoided had proper, effective and meaningful consultations with various stakeholders, especially suppliers and recipient hospitals, been done well in time by Delhi government,” wrote Bhalla.

Third, the MHA pointed out that most of the hospitals in Delhi have been converted into COVID-19 hospitals. Such hospitals, by the very nature of their earlier functioning, did not have adequate storage capacity. For the same reason, their oxygen-dispensing infrastructure also may not have been up to the requirement especially for augmented oxygen supply required for COVID-19 patients.

''A virtual meeting with all hospitals in Delhi, taking stock of their respective capacities and infrastructure, guiding them to suitably augment their storage facilities to the required level with the help of experts would have avoided tragic incidents,'' he said.

But who should take the initiative? According to the MHA, such things are to be immediately taken up proactively on a war footing, with the state government taking the initiative. Among possible actions are creation of a control room, proactive steps to manage the unprecedented crisis in a more scientific way and utilising all resources at the command of the Delhi government. The MHA urged the Delhi government to work with the Central government and take result-oriented measures like other states to minimise human suffering.

Clearly, no one wants to take the blame, and both sides know what the other needs to do. The politics over COVID-19 has perhaps dominated the response in Delhi in the last few days.