Udhayanidhi Stalin has given fresh impetus to his party's election campaign 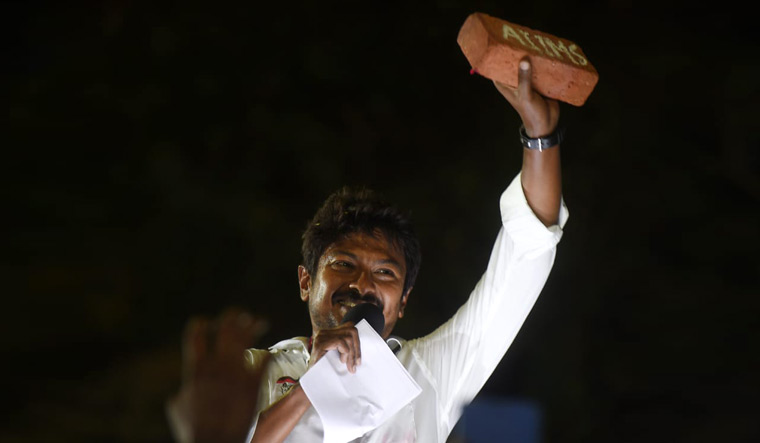 When DMK scion Udhayanidhi Stalin flashed a red brick in his hand in a filmy style, the crowd around his campaign van had a hearty laugh. His party cadres celebrated him, the Twitterati called it an epic troll, and the very next day a BJP functionary rushed to a local police station and lodged a complaint saying Udhayanidhi stole a brick from the AIIMS medical college and hospital construction site in Madurai.

The brick and the complaint went on to give fresh impetus to the DMK’s fiery election campaign.

Udhayanidhi intended to highlight the perceived failure on the part of the AIADMK and the BJP in completing the construction of an AIIMS hospital and medical college in Madurai, the foundation stone for which had been laid by Prime Minister Modi in 2019. Following this, DMK seniors including M.K. Stalin—who had been shying away from taking on the BJP—sat up to adopt the young scion’s style. The brick was even featured in the party's full-page ad published in several newspapers.

It was a quick trick to make a dig at the ruling AIADMK and the BJP, one both parties found difficult to counter. Then, a usually soft-spoken Kanimozhi fired the next salvo, making the entire election into an insider-versus-outsider fight. This constructed the narrative for the election season, one that was a fight to protect Tamil culture and Tamil land that had been built on the ideals of social justice. The narrative grew stronger when Kanimozhi asked the people if they want to be ruled by a person from Tamil Nadu or by proxy rule from Delhi.

“Do you want the Tamil Nadu to be ruled by a Tamil or should it be ruled by Modi and Amit Shah who are hiding being the AIADMK?” she asked.

DMK chief MK Stalin said, “a vote for AIADMK is a vote for the BJP, which will spoil the rights of the state and the Tamils.” After this, the DMK sharpened the attack against the BJP and its long arms reaching Tamil Nadu from Delhi.

However, the AIADMK deputy coordinator and Chief Minister Edappadi K. Palanisami, who had been all alone leading the campaign for the alliance, decided to attack the DMK by taking on Udhayanidhi Stalin and calling him a dynast.

The next day, both AIADMK and BJP leaders joined in.

A day later in the same Dharapuram, again with the red brick in his hand, Udhayanidhi made strong allegations against the  BJP and the Prime Minister, saying Modi climbed up “by sidelining senior leaders like L.K. Advani, Murali Manohar Joshi, Arun Jaitely and Sushma Swaraj.”

Countering the dynast charge, Udhyanidhi also went on to talk about how Amit Shah’s son Jay Shah took over as BCCI president.

Such salvos after salvos, launched by the young Turk of the DMK, have put the AIADMK and BJP in a spot. Seeking to build on this, Stalin sought to make the fight one that is between “Tamil pride" and "fascist forces.”