Voting held in 30 constituencies in Bengal, 47 seats in Assam 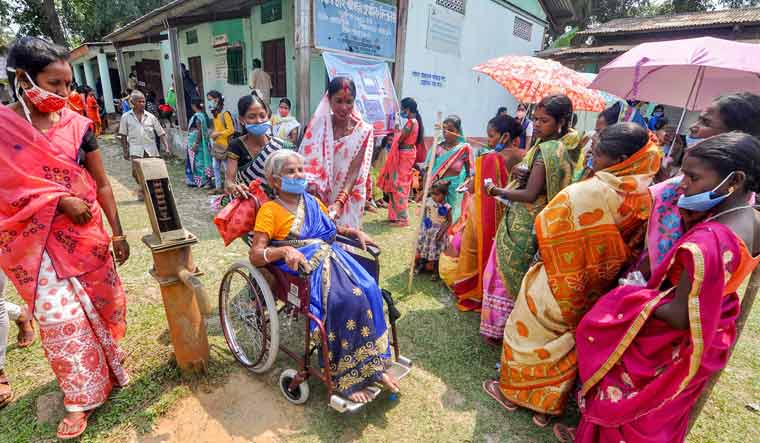 A voter turnout of 79.79 per cent was recorded in West Bengal and 72.14 per cent in Assam till 5pm on Saturday in the first phase of assembly elections in these states, the Election Commission said.

Voting was held in 30 assembly constituencies in West Bengal and 47 seats in Assam in this phase with a total of 21,825 polling stations.

"Non-functioning rate during the poll is lesser than experienced in last few polls," an EC statement said without elaborating.

On Saturday, a total of 167 cases of Model Code of Conduct violations were reported through the cVIGIL app from West Bengal out of which 111 were disposed of by 4.30 PM.

From the date of notification of the election till the first phase of voting, a record seizure of Rs 281.28 crore has been made in these states.

The seizure figure, which includes cash, liquor, narcotics and freebies, is more than four times higher than the total combined seizure of Rs 60.91 crore in assembly polls of 2016.

The poll panel said it had laid great emphasis on ensuring transparent and vigilant mechanisms for conducting elections that are free of inducement and intimidation.

In West Bengal, nearly 74 lakh electorate across 10,288 polling stations had registered to exercise their franchise in this phase.

Voting was held in 47 assembly constituencies of Assam with a total of 81 lakh electorate registered across 11,537 polling stations.

As a major push in conducting free and fair elections, live monitoring and webcasting mechanism for more than 50 per cent of polling stations, including critical and vulnerable polling booths, were put in place to ensure a safe and secure atmosphere in polling areas.

The Commission, state chief electoral officers, district election officers and the observers could watch live streaming and keep a close watch on these polling booths in Assam and West Bengal.

All the polling stations were directed to follow COVID-19 safety protocols.