There was no mention of CAA in BJP's Assam manifesto, in contrast to West Bengal 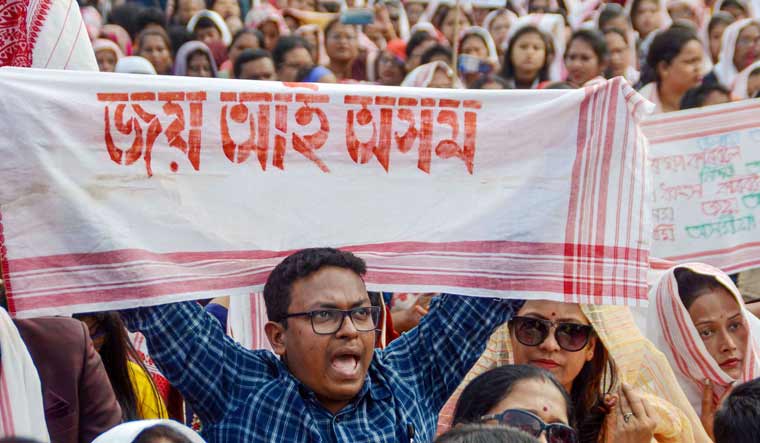 People participate in a protest against the Citizenship Amendment Act (CAA) at Nehrubali in Nagaon, Assam | PTI

The party also made 'ten commitments' in the manifesto, one of which is initiation of a process to "correct and reconcile" the entries made as part of the Supreme Court-mandated National Register of Citizens exercise, as it seeks to "protect genuine Indian citizens and exclude all illegal immigrants". The manifesto underlined that the BJP, if voted to power, will provide free education to every child, make arrangements to control floods and ensure that the state achieves "self-sufficiency" when it comes to production of essential items.

It further gave assurance that payments made to women under 'Orundoi' scheme will be increased to Rs 3,000 from the current Rs 830, and eligible residents would be empowered with land rights.

While there was no mention of CAA in the manifesto, Nadda, after releasing the document, said that the CAA will be implemented in Assam when the time is right. This comes in stark difference to West Bengal, where Home Minister Amit Shah promised the legislation in the first cabinet meet.

CAA a contentious issue in Assam

In both West Bengal and Assam, which will go to polls in the coming days, the CAA is a contentious issue. Unlike West Bengal, which is cleaved along communal lines, the law (which aims to grant citizenship to non-Muslim refugees from Bangladesh, Pakistan and Afghanistan) has faced bipartisan condemnation in Assam. Irrespective of the religion of the refugees, most Assam protesters want the cut-off date for citizenship to be fixed at 1971, as agreed to in the Assam Accord of 1986. The CAA would instead allow for flexibility of naturalisation till 2014. The NRC has already failed in Assam, as the Assamese people felt it would benefit illegal Hindu migrants from Bangladesh who have settled in large numbers in the region.

As Congress leader Tarun Gogoi said in an interview, there is an Assam-centric perspective regarding the CAA because of the history of the Assam Accord, which itself has a very powerful place in Assamese collective society. "The CAA threatens the Assam Accord. I think many people feel that the Assamese way of life, culture, values and stories that we have grown up with, things we read in our history are threatened." As per Clause 6 of the Accord, Constitutional, legislative and administrative safeguards, as may be appropriate, shall be provided to protect, preserve and promote the culture, social, linguistic identity and heritage of the Assamese people.

In 2020, Assam had burned over the issue, cleaved over ethnic lines. Students hit the streets, burning effigies of the prime minister, the home minister and the chief minister, and vandalising public property. There were bandhs called by the All Moran Students' Union (AMSU) to protest against the bill, and seek Scheduled Tribe status for six communities, affecting normal life in several parts of the state,

People in Bengali-dominated Barak valley districts of Cachar, Karimganj and Hailakandi, as also the hill districts of Karbi Anglong and Dima Hasao, went about their lives normally. People in the Brahmaputra Valley alleged the Centre had isolated them by not exempting the region from the purview of the controversial Act, barring areas under the Bodoland Territorial Area Districts (BTAD) and the three Autonomous Hill Districts. Hindu Bengalis dominating the Barak Valley, however, have welcomed the amended Act that seeks to accord citizenship to non-Muslim refugees from Bangladesh, Pakistan and Afghanistan who fled religious persecution there.

The Assam Congress on Tuesday wondered why the BJP's manifesto is silent on the issue of Citizenship Amendment Act (CAA) and claimed that the stand of the saffron party on the controversial Act varies from state to state.

The party, in a statement, also alleged that Shah sought to deny the existence of those people who lost their lives during the anti-CAA agitation in the state. "Their [BJP's] stand on the CAA is ambiguous. In West Bengal, they say they want it. In Tamil Nadu, they do not want it and in Assam they are silent. But the Congress has only one stand. We oppose the CAA and will leave no stone unturned to nullify it," it said.

In response, Nadda asserted that the Citizenship Amendment Act (CAA) has been passed by the Parliament and will be implemented "in time". The BJP is committed to protect and preserve the "identity and culture" of Assam, keeping the "natural process of cultural change intact". Referring to the issue of infiltration, the BJP president said that the party is committed to strengthening and scientific management of the international borders. "Border management is a continuous process and we will continue to improve it", he said. Asked about the implementation of the clause six of the Assam accord to ensure the constitutional safeguard of the linguistic, cultural, social identity and heritage of the Assamese people, Nadda said, "it is under process and we are committed to it".