Friedrich hinted the evidence against him could have been doctored 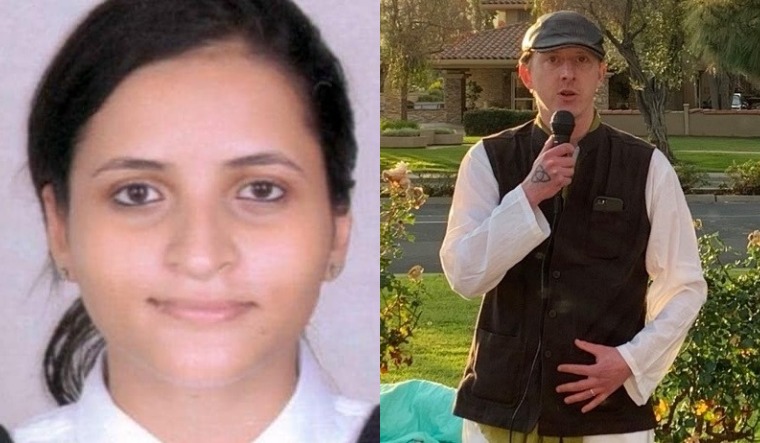 A collage of Nikita Jacob (supplied) and Pieter Friedrich (via Facebook)

US-based activist-journalist Pieter Friedrich has lashed out at the Delhi Police for claiming he had discussions with Nikita Jacob, a suspect in the 'toolkit' case.

Friedrich was named by the Delhi Police in a press conference on Monday for having possible links to the suspects behind the drafting of the toolkit in a bid to organise protests over the farmers' issue.

Friedrich took to Twitter on Wednesday morning to respond to a report on a prominent news website that claimed he had chatted on WhatsApp with Nikita Jacob. Nikita Jacob, a Mumbai-based lawyer, was on Wednesday granted three weeks' transit anticipatory bail by the Bombay High Court in the case.

Friedrich also alleged Delhi Police was "lying through their teeth" and highlighted grammatical errors in the chats. Friedrich tweeted, "Claimed correspondence between me and #NikitaJacob by lying through their teeth @delhipolice . 'Agrees'? I would have written 'agreed.' Double question marks with a space after sentence? No capitalization? Give me a ***king break. Incompetents can’t even fabricate well."

Friedrich further hinted the evidence against him could have been doctored and referred to recent claims that malware was planted in the laptop of one of the accused in the Bhima-Koregaon case. Friedrich tweeted, "Need I remind you that #BhimaKoregaon accused Rona Wilson’s laptop was just reported as containing malware which was used to plant evidence against him? Modi regime is well-versed in fabricating 'evidence' to justify its witch-hunt against dissenters."

In an interview with The Quint, published on Wednesday, Friedrich claimed he did not know Disha Ravi, Nikita Jacob and Shantanu Muluk, the key suspects in the toolkit case.

When asked whether Delhi Police or any Indian security agencies had reached out to question him, Friedrich pointed out he was a US citizen and not under India's jurisdiction. “I’m not a citizen of India. If any law agency of India reached out to me for questioning on any matter... I am not under jurisdiction of any Indian government entity and, as a US citizen, I have the US constitutional right to both freedom of expression and to remain silent," he told The Quint.

Early on Tuesday, Friedrich had released a statement, claiming the Narendra Modi government was targeting him for his persistent criticism of the BJP and RSS.