US arms sales to India zoomed to $3.4 billion in Trump govt's final year 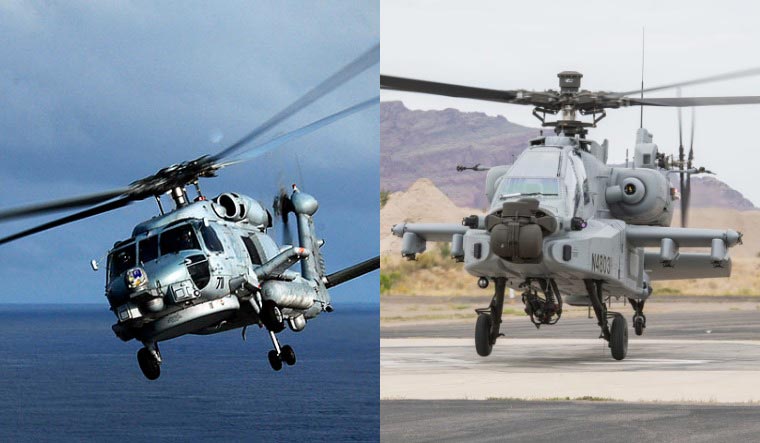 A collage, from left, showing the MH-60 R (US Navy via Wikimedia Commons) and the AH-64E Apache (Boeing); India is purchasing both types of helicopters from the US

India's weapons procurement from the US jumped from a meagre $6.2 million to a whopping $3.4 billion in the final year of the Donald Trump administration, according to official data.

As per the data released by the Defense Security Cooperation Agency (DSCA), the jump in the sale of American weapons to India comes at a time when sale of weapons from the US to other countries has dipped to $50.8 billion in 2020 from $55.7 billion in 2019.

Several countries reported a drop in purchase of weapons from the US.

For Pakistan, the official figures reflected that sale of weapons under FMS did happen, even though there was a freeze in any military and security assistance to Islamabad from the Trump administration.

In 2019, there was no sale of US military weapons to Pakistan. In fact, the US refunded $10.8 million to Pakistan, taken for the purchase of weapons.

Between 1950 and 2020, Pakistan purchased weapons worth $10 billion from the US under FMS.

According to the Assistant Secretary of State for Political Military Affairs Clarke Cooper, fiscal 2020 saw a total of $175.8 billion in US government-authorised arms exports. This is overall a 2.8 per cent increase since fiscal year 2019.

The overall value of State Department-authorised government-to-government FMS cases implemented by the Defense Security Cooperation Agency decreased 8.3 per cent from $55.39 billion in Fiscal Year 2019 to $50.78 billion in Fiscal Year 2020. "The dollar value of potential FMS sales, formally notified to Congress, also rose by more than 50 per cent from $58.33 billion to $87.64 billion. This was driven by the July potential sale of $23.11 billion worth of F-35 aircraft to Japan, which was the second-largest single FMS notification ever authorised by the Department of State,” Cooper said.