The girl's father alleged the body was lying unattended for 1.5 hours 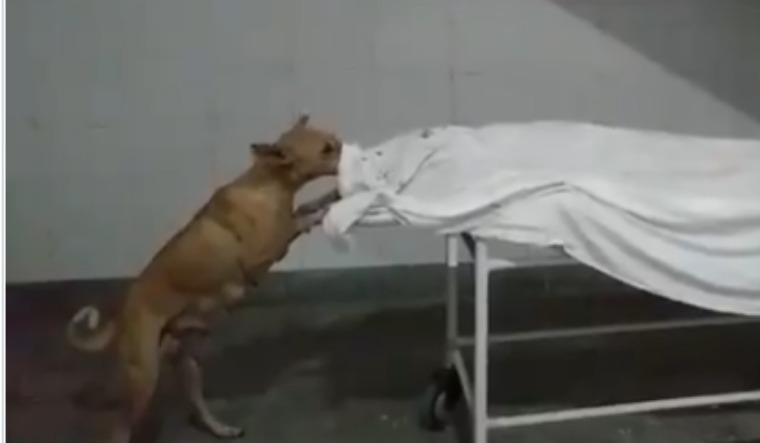 Screengrab of the incident in Sambhal

In a shocking incident, a stray dog nibbled on a dead body at a government hospital in Uttar Pradesh's Sambhal district.

According to The Times of India, the girl, Rinki (17), was travelling with her brother, Pawan Kumar, on a motorcycle when they met with an accident on Wednesday. The Times of India reported their motorcycle collided with a truck in the Asmoli area of Sambhal. They were taken to the district hospital in Sambhal where Rinki was declared brought dead. Her brother was referred to a hospital in Moradabad in a critical condition.

Rinki's father, Charan Singh, told reporters that her saw a stray dog feeding on her body when it was lying unattended. Video footage and photos of the incident went viral on Thursday, with the opposition Samajwadi Party also sharing it.

Charan accused the hospital staff of negligence and declared he would file a complaint against them. He alleged the body was lying unattended for 1.5 hours.

Chief medical superintendent of the hospital Dr Sushil Kumar blamed the incident on the presence of "several stray dogs" in the hospital premises. Sushil Kumar told The Times of India that he had written to the municipal corporation four times to deal with the menace of stray dogs, but no action was taken.

"After investigation we found out the sweeper and ward boy were responsible. They had a lot of bodies to deal with. However, we have suspended them and we have sought an explanation from the doctor that was on emergency duty along with the pharmacist. We have also formed a committee to investigate the matter," a hospital official told IANS.

On Thursday, a family in Aligarh's Pilkhuni alleged their newborn daughter died in a hospital in the area from negligence. They claimed the child's body, including her face, bore animal bite marks, presumably caused by rats.