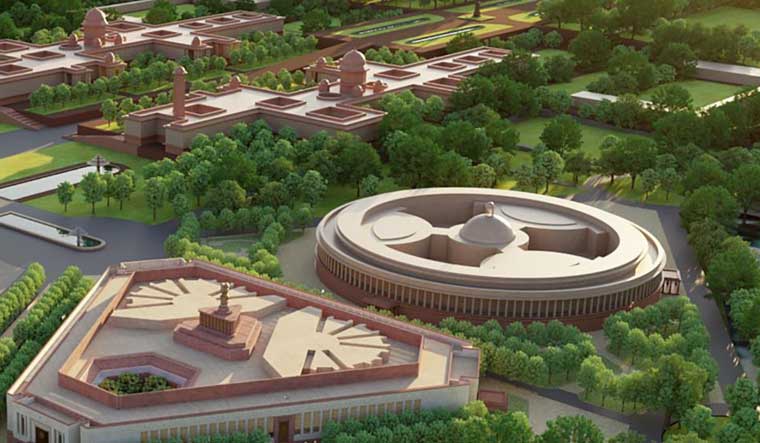 Prime Minister Narendra Modi is likely to lay the foundation stone for a new Parliament building in the first half of December, sources said.

The sources further said that around five statues, including that of Mahatma Gandhi and Bhim Rao Ambedkar, in the Parliament complex are also likely to be relocated temporarily due to the construction work and they will be reinstalled at prominent places within the new complex once the project is completed.

The new building will be constructed close to the existing one under the Central Vista redevelopment project and it is expected to be completed in 21 months from the start of construction work.

The redevelopment project of Central Vista—the nation's power corridor—envisages a new triangular Parliament building, a common central secretariat and revamping of the 3km-long Rajpath, from Rashtrapati Bhavan to India Gate.

Although the proposed date of laying the foundation stone of the new Parliament building is around December 10, the final date would depend on the availability of the prime minister, the sources said.

According to the plan, the new Parliament building, which will have separate offices for all MPs, will be equipped with the latest digital interfaces as a step towards creating "paperless offices".

The new building will also have a grand Constitution Hall to showcase India's democratic heritage, a lounge for members of Parliament, a library, multiple committee rooms, dining areas and ample parking space.

The sources said that five statues, including that of Mahatma Gandhi and Bhim Rao Ambedkar, at the existing Parliament complex are likely to be relocated temporarily and they would be reinstalled once the construction work of the new Parliament building is completed.

The iconic 16-feet-high statue of Mahatma Gandhi is located opposite Gate Number 1 of Parliament House. The statue greets visitors entering Parliament House and has also been the location of gatherings, protests and press interactions by MPs.

According to the Rajya Sabha's website, the statue of Mahatma Gandhi, in a meditating posture sculpted by Ram Sutar, was unveiled by the then president of India Dr Shankar Dayal Sharma on October 2, 1993. It also said that the statue was donated by the Ministry of Urban Development.

In September, Tata Projects Limited had won the bid to construct a new Parliament building at a cost of Rs 861.90 crore.

The existing building is a British-era building, designed by Edwin Lutyens and Herbert Baker who were responsible for planning and construction of New Delhi.

The foundation stone of the existing Parliament House was laid on February 12, 1921, and the construction took six years and cost Rs 83 lakh at that time. The opening ceremony was performed on January 18, 1927, by the then governor-general of India, Lord Irwin.

The CPWD had said, "The plinth of the new building shall match that of the existing one, which is approximately 1.8 metres above the ground level."