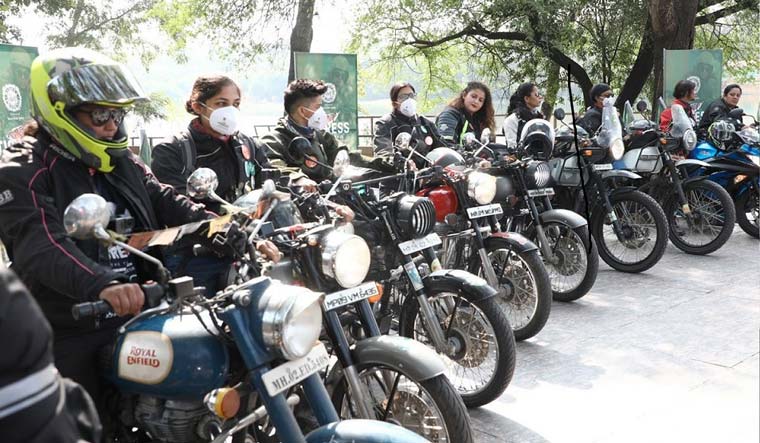 Fifteen well-known women bike riders from across the country are participating in the 1,500 kms trail to major tourist destinations in the state.

In a bid to further promote the popular tourists spots of Madhya Pradesh and to give out the message that tourism in the state is completely safe even for solo women travelers, the state tourism department on Thursday launched ‘Tigress on the trail’—a week-long women-only bike trail to major tourist destinations in the state.

Fifteen well-known women bike riders from across the country are participating in the 1,500 kms trail to major national parks (tiger reserves) like Pench, Kanha and Bandhavgarh, world heritage sites of Khajuraho and Sanchi and popular religious destination of Maihar. The trail that commenced on Thursday will conclude on November 25. The state tourism department is touting the bike tour as the first of its kind in the country.

The trail was flagged off from Bhopal by tourism and culture minister Usha Thakur, who said on the occasion that if there is undaunted, fearless and safe tourism anywhere, it is in Madhya Pradesh, the heartland of the country. Thakur said that Madhya Pradesh has created so many dimensions for the safety of women that other states have not even thought of. The minister added that the girls are the pride of the nation and only cultured and empowered daughters form a strong foundation for the nation. She said that the problems caused due to COVID-19 in the field of tourism will have to be overcome through such innovations to take tourism to great heights.

Principal Secretary of tourism department, Sheo Shekhar Shukla has said that the objective of the event is to convince all tourists that Madhya Pradesh is a completely safe destination even for a ‘solo woman traveler’ and that it has immense possibilities of adventure tourism.

Speaking at the flagging off ceremony, Shukla further said that by taking the decision to organise such an event in a dismal atmosphere amid COVID-19 pandemic, the tourism department has paved a new way amidst challenges.

He said that the first women’s biking trail is an innovation in which the fame of tourist destinations of the state will be further enhanced. These women bikers will not only enjoy, promote and propagate tourism in the state, but also will inspire other women to come forward to do so.

He said that Madhya Pradesh is now fully open to tourism. Any tourist can move around anywhere in the state without any hindrance and their safety is the responsibility of the state government. A network of improved health facilities has been laid down all over the state, so that no one is subjected to inconvenience. This message will be spread by the women bikers during their excursion. All these women bikers will serve as brand ambassadors for the state, Shukla said.

He added that the women bikers can also provide information to the tourists about their smooth and safe journey through these tourist sites while introducing them to the attractive destinations of Madhya Pradesh.