All you need to know about Dhanteras: Festival of wealth and festivities

The festival is considered auspicious to buy gold, silver, and metal items 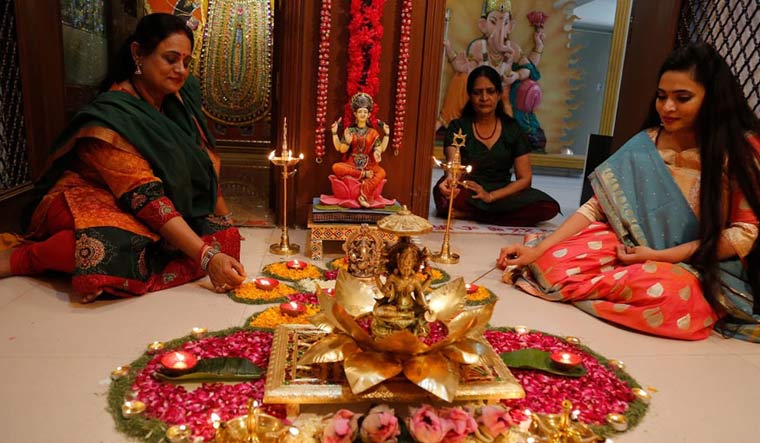 Women light earthen lamps on a rangoli, a hand decorated pattern on the floor, as part of Diwali festivities | AP

The festival of light, Diwali is fast approaching and with that people are fervently finishing cleaning, purchasing, and prepping for the festivities. This 5-day festival starts with Dhanteras. Dhan in Sanskrit means wealth and Teras means thirteenth. It is called so as it falls on the 13th day of Karthika Masa, Month of Krishna Paksha. Read below to know all about this festival of wealth:

People worship Lord Kuber, Lord Dhanvantri, Goddess Lakshmi, and Lord Yamraj on this day. There are many stories as to the reason for the celebration of this festival in mythology. One of the most popular stories is of King Hima. An astrologer predicted that his son would die of snakebite on the 16th year of his birth. The astrologer said that one of the ways of saving is to get married to a girl of good horoscope. So Hima’s son was married to one such girl who did everything to prevent her husband’s death.

She laid out all her dazzling ornaments made of gold and silver in the sleeping chamber. The girl also lit oil lamps and both stayed awake on the day of his 16th birthday. The Lord of Death, Yama came disguised as a serpent to take away Hima’s son’s life. The serpent’s eyes were blinded by the brilliance of lamps. Instead of killing Hima’s son, he started listening to the stories the wife told all night and had to return without taking his life. So this day is celebrated to keep the husband and the family safe. People buy gold jewellery for Dhanteras and light oil lamps.

Another story in Hindu mythology is that of Lord Dhanvantri who is considered as a Lord of Medicine. Dhanvantri is an incarnation of Lord Vishnu and was born on this day due to Samudra Manthan. The Gods and the demons were fighting for the holy water or Amrit that could make them immortal.

As per legends, Goddess Lakshmi came out of the ‘Samudra Manthan’ on this day. Hindus also worship Lord Kubera who is known as God of Wealth. Buying Dhanteras jewellery made of gold or silver, buying utensils and performing puja helps in increasing prosperity and good luck. Starting a business on this day is also thought to be very auspicious. A Kalash is placed and worshipped to seek blessing from Lord Dhanvantri for good health.

Things not to do during Dhanteras

The festival is considered auspicious to buy gold, silver, and metal items on this day. But there are things that should not be done or brought on this day:

The belief among Hindus in mythology has helped continue the tradition of celebrating Dhanteras. Whether you are a believer in it or not it is a great way to spend quality time with your family.