UP: Bhim Army chief alleges shots were fired at his convoy 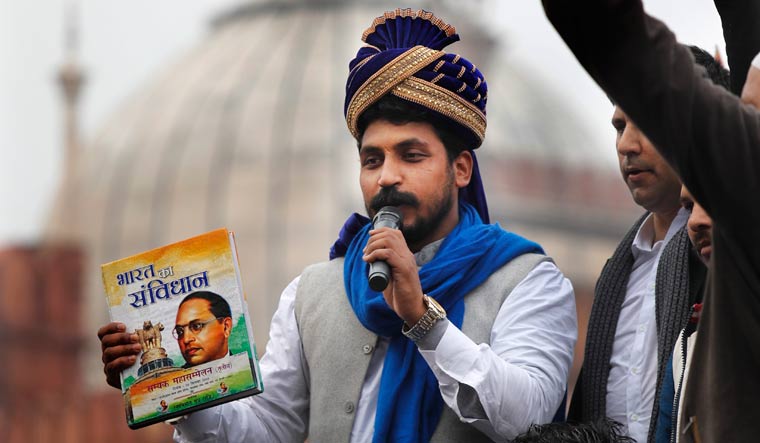 Chandra Shekhar Azad, chief of the Bhim Army dalit group, on Sunday claimed that shots were fired at his convoy in Uttar Pradesh’s Bulandshahr. Earlier this year, Azad founded the Azad Samaj Party and is its national president.

Azad gave the information on his Twitter handle after an election rally for the Assembly bypolls in Bulandshahr. He tweeted that opposition parties were nervous as his outfit has fielded candidates in the elections.

"Today's rally has left them worried. This is the reason shots were fired at my convoy in a cowardly manner,” he tweeted in Hindi, adding that it shows opposition parties' disappointment and they wanted to vitiate the environment.

While the state police initially said the incident had not been confirmed, two FIRs were registered.

The one filed by the Azad Samaj Party’s district chief, Madanpal Singh Gautam, is under Sections 147, 148 and 307 of the Indian Penal Code, 1860. It alleges that at 7.35pm on Sunday, around 8-10 people attacked the Bhim Army chief’s convoy near the Alamtara Mosque. The FIR says that the attack was made “with the intention to kill” as opponents were “agitated seeing the attendance at today’s rally”. This is a reference to the rally that Azad had addressed earlier in the day in support of the party’s candidate Mohammed Yameen.

The FIR also alleges that political opponents want to kill Azad as he is the “emerging face of dalit society” and “the entire Bahujan Samaj looks upon him as an ideal and a leader”.

The FIR filed by Dilshad Ahmed, the candidate fielded by the All India Majlis-e-Ittehad-ul-Muslimeen (AIMIM) in Bulandshahr, is under Section 307 of the IPC. This one alleges that at 7 pm when the candidate was in the vicinity of the Alamtara Mosque, where he had gone to meet some relatives, there was ‘indiscriminate firing’ from members of the Azad Samaj Party. Ahmed has also alleged that he has been pressured to withdraw his candidature. It calls upon the police to take action against the culprits to ensure that the election can be held without any fear.

Seven Assembly seats in the state will go to the polls on November 3.

(With inputs from PTI, Puja Awasthi)