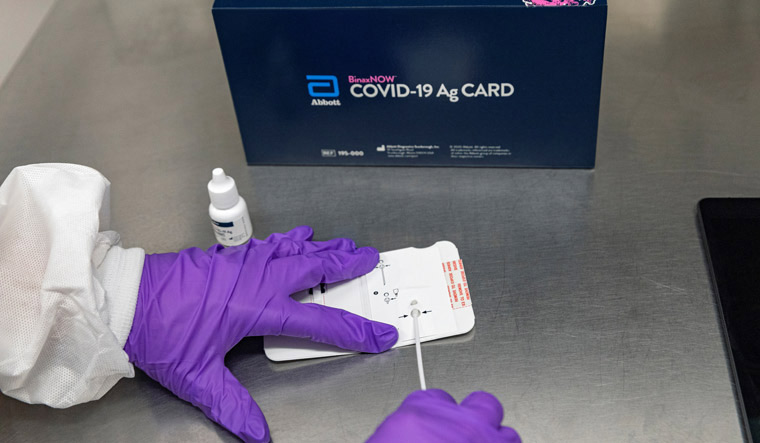 As India rolls out the new FELUDA paper strip for detecting SARS-COV2, existing laboratories already approved by the ICMR for conducting the RT-PCR test for COVID-19 can now begin to use the new test.

"No further approval is required from ICMR for existing laboratories. The option of 'TataMD CHECK CRISPR Test (TATA Medical and Diagnostics Ltd)' has been added in the drop-down kit selection menu of the COVID-19 web portal of ICMR and may be selected by the laboratory concerned while entering the results," the ICMR said in its advisory on the test.

"As claimed by the manufacturer, no further RT-PCR based confirmation is required for samples that are confirmed as positives or negatives by the CRISPR SARS-CoV-2 test," the advisory said, adding that any prescription for RT-PCR, CRISPR, TRUENAT, CBNAAT may be considered equivalent.

The FELUDA (acronym for FNCAS9 Editor-Limited Uniform Detection Assay) or the CRISPR SARS CoV-2 test is a new diagnostic method that uses the gene editing technology (CRISPR-Cas9) to identify and target the genetic material of SARS-CoV-2 virus. It works by identifying the SARS-CoV-2 virus strain and uses a thermal cycler instead of a qPCR machine (used for the RT-PCR test) for conducting the test.

The test has been developed by Council of Scientific & Industrial Research (CSIR)-Institute of Genomics and Integrative Biology (IGIB), Delhi and has been validated by the Department of Atomic Energy (DAE) – National Center for Biological Sciences, Tata Institute of Fundamental Research, Bengaluru.

According to the Union health ministry, based on tests in over 2,000 patients during trials at the Institute of Genomics and Integrative Biology (IGIB) and upon testing in private labs, the test showed "96 per cent sensitivity and 98 per cent specificity". ICMR’s current acceptance criterion for RT-PCR Kit is at least 95 per cent sensitivity and at least 99 per cent specificity, Union health minister Dr Harsh Vardhan has said.

"While the RT-PCR test, the gold standard for SARS-Cov2 testing, has similar accuracy [as compared to the FELUDA test], the rapid antigen tests have a sensitivity and specificity less than 70 per cent, the developers of the test at IGIB claimed. "RT-PCR requires not just costly equipment and reagents, but also the technical expertise to perform the reaction. With FELUDA, the need for technical expertise is minimal and [there's] no requirement of expensive equipments making it an easy to perform and point of care test. It, thus, saves time, money and space," they said. The test would give results within an hour, and cost about Rs 500. Scientists at IGIB are also working on a DIY kit for COVID testing at home.

Testing data should be entered into the ICMR COVID-19 web portal on a real-time basis, it added.