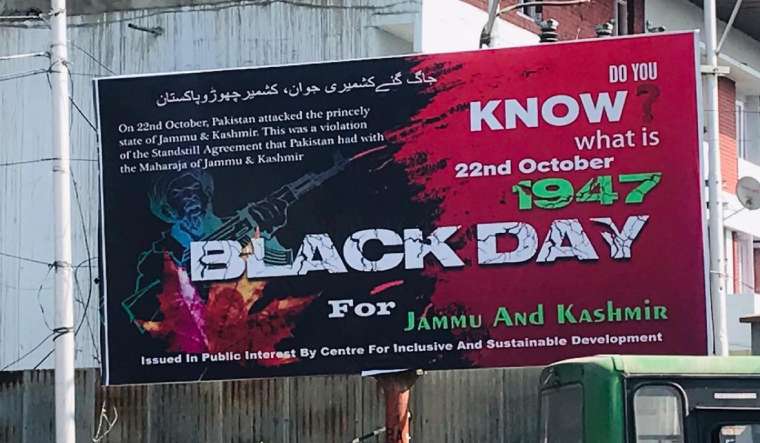 India will observe October 22 as ‘Black Day’ to mark Pakistan’s invasion of Jammu and Kashmir in 1947, drawing attention to the role played by the neighbouring country in the decades of unrest in the valley.

As per reports, Kashmiris have displayed hoardings and banners calling out Pakistan, highlighting the atrocities committed by Pakistani militia or tribal raiders against thousands just two months after India’s Independence and the subsequent partition. The hoardings also emphasise on October 22 being observed as ‘Black Day’.

Kashmir is observing Oct 22 as a Black Day to remember the attack on Jammu and Kashmir by Pakistan on this day in 1947 in violation of the Standstill Agreement with the ruler of the princely state of Kashmir. #kashmir #kashmirblackday #pakistan #oct22 pic.twitter.com/BU4LldtGLs

In 1947, Pakistan, which had entered into a Standstill Agreement with the Maharaja of Kashmir a few days before Independence, broke the agreement on October 22 with the help of tribal raiders and killed thousands of people and looted the villages in Baramulla. The Indian Army was called in eventually to the rescue and defuse the situation.

However, Pakistan has always denied its role in the incident, calling it a “spontaneous attack” by the tribes. In fact, Pakistan has observed October 27 as ‘Black Day’ for years, labelling the Indian Army’s entry into the territory as illegal.

The Centre, meanwhile, has planned several events to mark the event in history. A two-day symposium in Srinagar organised by the National Museum Institute titled ‘Memories of 22 October, 1947’ will highlight the historical narrative of the event, The Print reported. It is also expected to feature photos and videos from Baramulla’s Mission Hospital where many had then taken refuge.

The purpose of observing the day is to underscore the role of Pakistan in the continuous violence and terrorism that still haunts Kashmir.

“The consequences of this water-shed event are still affecting the country. It is necessary to portray such a historic narrative in order to create a dialogue among the people. The aim of such an initiative would be to bring about awareness among the people about this phase of our history. It will help in remembering how the country fought in the very first conflict faced by (independent) India,” a concept note by the symposium read.