"The NDA government’s performance is there for all to see" 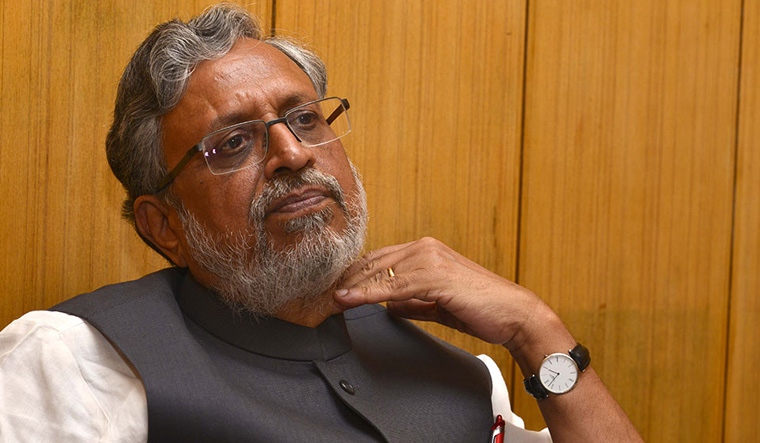 The assembly election in Bihar is scheduled to be held in three phases—October 28, November 3 and 7. The result for a total of 243 seats will be announced on November 10. Opinion polls say that the ruling JD(U)-BJP led NDA government will come back to power in the state.

The JD(U) is contesting in 122 seats and the BJP in 121 seats. The Mahagathbandhan alliance, led by the RJD, has parties like the Congress, the CPI and the CPI(M).

The Lok Janshakti Party, which is part of the NDA at the Centre, is fighting the assembly elections on its own. Some say it is to ensure that a BJP leader occupies the chief minister’s chair in Bihar.

In an exclusive telephonic interview to THE WEEK, Deputy Chief Minister Sushil Kumar Modi exudes confidence of the NDA alliance coming back to power in Bihar with a comfortable margin. Excerpts:

How confident are you of the NDA government returning to power in Bihar?
I am fully confident that we will come back to power, that too with a comfortable majority. The NDA government’s performance is there for all to see. Just compare the situation in Bihar today to what it was before 2005. We are fighting the election on all the good work done for the state by Nitish Kumar and Narendra Modi. Even in 2010, when Narendra Modi was not the prime minister, the NDA came back to power in Bihar.

The opposition in Bihar lacks credibility. The grand alliance, or the so-called Mahagathbandhan, has since the past five years lost many of its important allies. It is just the RJD, the Congress, and the communist parties in it now. People still remember the days when their alliance ruled the state. It is something they don’t want to remember. Many leaders belonging to their alliance have joined the NDA in the recent times. Around 70 per cent of parties from the original alliance are no longer with them.

Our government has spent Rs 2.63 lakh crore on construction of roads, bridges, irrigation facilities, buildings and power supply infrastructure across the state in the past 15 years. Nitish Kumar has worked for all sections of society. Our government has brought in the much-needed development to Bihar over the last so many years. We are not saying we will take the people of Bihar to the moon. But we will ensure that there will be peace and further development in the state. There is no anti-incumbency against our government, because we have tirelessly worked for the betterment of the people of Bihar.

Won’t the decision by the LJP to go alone in the polls have a
bearing on the result, as it could confuse voters?

I agree there was an attempt to confuse voters in Bihar from some sections. No party can win the election in Bihar on its own. It is a teamwork, and as far as the NDA is concerned, we are collectively campaigning. The LJP should not have left the NDA in Bihar. This was something that could have been avoided. Had Ram Vilas Paswan been
active in the talks, this crisis would not have happened. Having said that, this will have no bearing on the final result. The BJP doesn’t have any hidden agenda. The prime minister and the chief minister will be addressing joint election meetings in the coming days, and that will end the confusion, if any.

The rape and killing of a dalit woman in Hathras in Uttar Pradesh shook the conscience of the nation. Across the country people had protested against this sad incident. Will this have any impact in neighbouring Bihar?

That was a localised issue, and will have no impact in Bihar. Besides working on the safety of women, our government has brought several measures to curb violence against women. Any wrongdoer, in such cases, will be severely punished.

The RJD, this time, has given election tickets to wives of two rapists. One of them is an absconder since last so many years. The RJD is always known to give tickets to criminals. They all talk about women’s safety, but this is what they do.