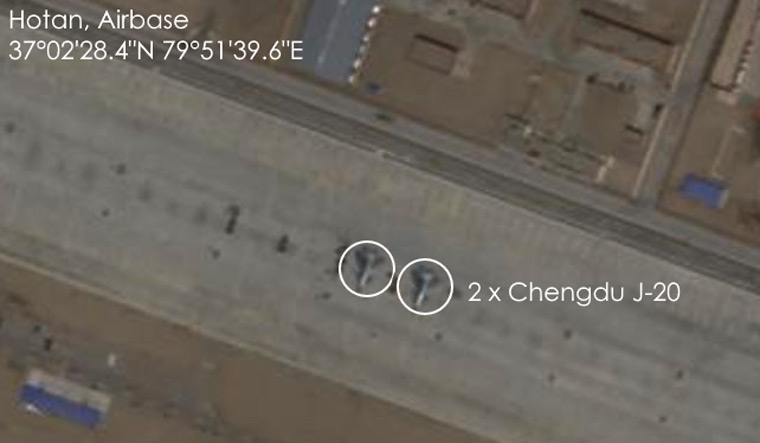 After reports emerged of the Chinese fifth-generation J-20 stealth fighter being sighted at the Hotan air base in Xinjiang, just around 300km from the Line of Actual Control (LAC) with India, the country’s state-run news site Global Times has sought to downplay the sighting.

2 x Chengdu J-20 stealth fighters were spotted at #Hotan airbase recently, this as the #IndiaChinaFaceOff continues

According to a Forbes report, citing commercially-available satellite imagery, two J-20 fighters were seen at the Hotan air base in Xinjiang, China.

“The PLA has not announced any J-20 deployment at Hotan Airport,” the Global Times wrote.

“The J-20 is a long-range heavy fighter jet. So when deployed in Hotan, it can potentially cover many areas in Central and South Asia. But foreign media should not over-interpret its possible presence in a flashpoint region, as it is likely part of normal training on long distance flight and environment adaptation,” Chinese military aviation expert Fu Qianshao told the news site.

“China is a large country with many airfields in various terrains and under different climate conditions, and the J-20 needs to fly in more regions to adapt,” Fu added.

This is the first sighting of the J-20 near the border with India since the stand-off between both sides began in May. The last news of a J-20 deployment near India was in February 2018. The J-20 had been spotted in Tibet on multiple occasions earlier.

Buzz around the J-20 has increased since India acquired its first batch of five Rafale multirole fighters, which arrived in the Ambala air base in Haryana, just under 400km from the border with China.

Five more Rafales are in France, where IAF pilots are training with them. All 36 Rafales ordered from Dassault are expected to be delivered by the end of 2021.

While the J-20 has been touted as a stealth fighter, capable of maintaining a tiny footprint on enemy radar, IAF officials in the past have said that it could be shot down with the Russian S-400 missile defence systems. According to reports, IAF pilots in SU-30MKIs were able to detect the Chinese J-20s on their radar screens in 2018 when the Chinese jets were training in Tibet.

India does not have any stealth fighters in its arsenal, after the country pulled out of the Fifth Generation Fighter Aircraft (FGFA) project with Russia in 2018. However, former Air Marshal B.S. Dhanoa had said in July last year that the IAF could consider the Su-57 once it entered service with the Russian military.