Another year, same misery: Why rains bring Mumbai to a grinding halt every year 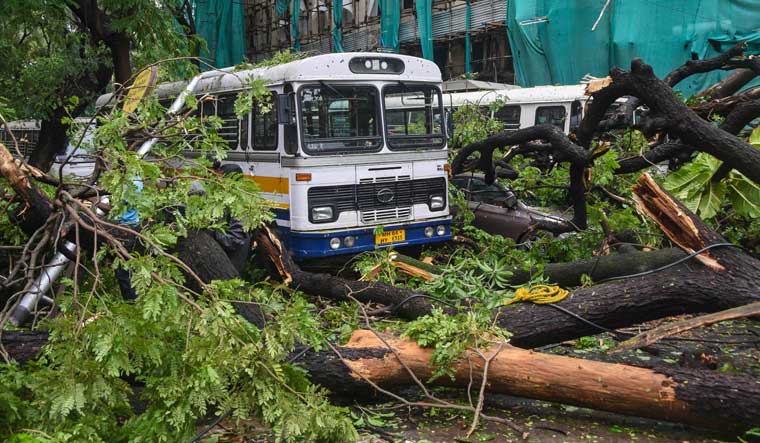 Uprooted trees are lying on a road following heavy rainfall, in Mumbai | PTI

The torrential downpour witnessed by the city of Mumbai in the past 72 hours has been one of its kind so far, say experts, and pointed out that exact same intensity would have submerged cities elsewhere in the world.

As heavy showers, accompanied by harsh, cyclone-like winds, continue to unleash their wrath, the maximum city has been brought on the edge, with rainwater seeping inside houses, uprooting trees, submerging vehicles on roads, flooding hospitals and COVID-19 care centres, landslides, and as seen in a video on Twitter, people struggling to not drown in manholes and dumpyards.

Incessant downpour and strong winds battered South Mumbai, causing floods in several areas, including Colaba, Byculla and Girgaon Chowpatty where water from the sea was seen coming on to the roads.

Chief Minister Uddhav Thackeray took stock of the situation on Thursday even as the Panchganga River in Kolhapur was flowing close to the danger mark. A statement issued by the chief minister's office said Thackeray asked the authorities to remain alert and ensure that citizens do not face hardships.

July 5, when the heavy rains brought life in the city to a grinding halt, was the day when the city was scheduled to kick-start life with easing of COVID-19 restrictions and reopening of malls after months. As expected, fear associated with COVID-19, along with heavy rains, restricted footfalls in malls on the first day of opening, to 15-20 per cent of what is normal.

Congress politician from South Mumbai Milind Deora took to Twitter to "urge the Maharashtra government to conduct a comprehensive impact assessment study with a 30-year vision (2050), in order to outline and execute a long-lasting plan for Mumbai." He further said environmental sustainability must precede indiscriminate development.

According to experts, one of the reasons for the flooding is that the lockdown imposed to contain the spread of the pandemic derailed most of the pre-monsoon work undertaken by the authorities. "The workers have been diverted to managing COVID related duties and many of them who live in far off suburbs have not been able to report to work," said Sayli Udas Mankikar from Observer Research Foundation in Mumbai.

The flood-like situation though, is not new to the city. Every year, for at least a week or two, the situation turns grim and the city would be brought to a standstill. Two pertinent aspects that lead to this situation year on year are the city's innate geography and a systemic failure on the part of the authorities managing it.

"Mumbai is basically in the shape of a saucer which makes it flood prone. The water cannot percolate down and has to be pumped out. This is also because of over-concretisation in the city that leaves little room for natural percolation of water at the ground level.The Brihanmumbai Storm Water Disposal System (Brimstowad) project of 1993, aimed at overhauling Mumbai's 19th century drains, got fast-tracked after the 2005 deluge which killed more than a thousand people. But by the time the project was implemented, it was too late. Also the BMC designed eight pumping stations all across Mumbai to pump out collected rainwater from the city out into the sea, which again got delayed and didn't function as per expectations. The most important aspect is the lack of intra-agency communication, between BMC and MMRDA which ultimately leads to this flood-like situation in the city. They start talking to each other only two days before the rains start. So, for instance in Mithi River which is 18km long, 11km is under BMC and the rest is under MMRDA and this dichotomy is at the crux of the problem," explained Mankikar.

"It is not that we don't intend on making life smooth and safe for our citizens, but it is not that simple and straightforward. We need to make sure all agencies involved are on the same page and willing, and that itself takes ages sometimes," said a BMC official on the condition of anonymity.