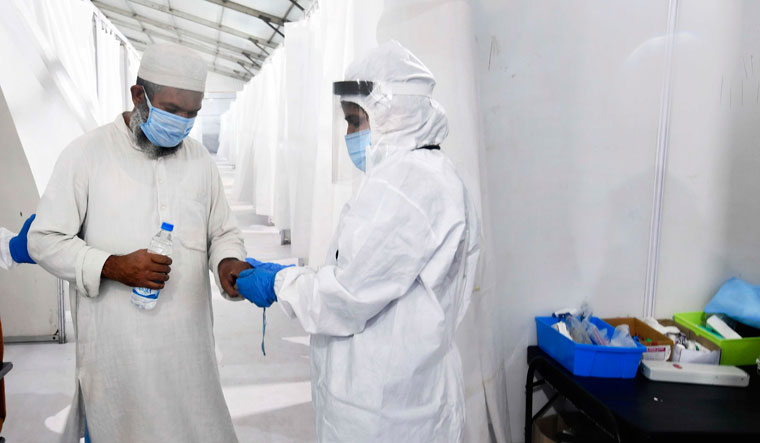 Dharavi has an inherent spirit to fight all odds with its camaraderie. A few months back, in April and May, it was the hotbed of Covid-19 infections in Mumbai. And now, as on July 29, Asia’s largest slum has just three active cases.

Incidentally, a record number of Covid-19 survivors from Dharavi are coming out to donate their blood plasma to help fellow beings. “Most of the essential services workers from Dharavi were found Covid-19-positive, and, among them, almost 75 per cent were in the age group of 20 to 50,” says Kiran Dighavkar, assistant municipal commissioner of G/South ward which comprises Dharavi. “They did not have comorbidities, and hence, their plasma was found to be good with a high load of antibodies [that can be used for plasma therapy to treat the infected]. All the 2,100 discharged patients were asked if they were willing to donate their plasma, and almost 400 to 500 agreed.” The Brihanmumbai Municipal Corporation authorities have identified 50 to 60 eligible candidates from Dharavi for plasma donation, and among them 15 have already donated it. “We are quite excited about the number of volunteers who are coming forward to volunteer for this effort,” says Dighavkar.

The snaking roads of Dharavi now wear a particularly clean and refreshing look. Its narrow, confined alleys look freshly washed, and its heaps of garbage have disappeared. Almost everyone wears mask, and the slum seems unusually quiet with fewer people around.

Crouching outside her tenement, Lakshmi Kamble, a third-generation resident of Dharavi, lauds the aggressive cleaning and disinfection efforts that happened in the area. “Because of one virus suddenly everyone seems to be taking interest in Dharavi,” she says. “Why did they neglect and ignore us for so long?”

Covid-19 reached Dharavi on April 1, when a 56-year-old man died on the very day he tested positive for the coronavirus. Soon, the numbers spiked and contact tracing became an enormous challenge for the authorities. “[In Dharavi,] a community toilet is usually shared by 300 to 400 people. That one factor was enough to strike off the concept of contact tracing, as was being applied elsewhere in the city,” says Dighavkar. What followed then was an aggressive effort of proactive tracing, tracking and testing through multiple fever camps, and prompt acquisition of facilities for quarantining and isolating patients.

At the time when the pursuit of the virus was at its peak in April, there were only eight health posts in Dharavi, each manned by an assistant medical officer and a few nurses, and supported by 200 community health volunteers and 50 odd coordinators. This was not enough for the densely-populated slum. More hands were needed in distribution of essentials, too. And, that is where Dharavi’s strong community engagement came into the picture.

At a time when most private clinics and hospitals remained shut in Mumbai, 24 private doctors based in Dharavi came forward to lend a helping hand to fight Covid-19. They screened close to 48,000 people within the first week itself in six high-risk zones. And an additional 350 clinics, which had shut down, started screening people for Covid-19, and they coordinated their efforts via WhatsApp. “We thought it was better to serve our own people than remain cooped up indoors,” says Dr Yusuf Khan, president, Dharavi AYUSH Doctors’ Association. “The people here believe us. So, when we say that ‘yes, you must get quarantined’, people obey.”

As with doctors, the BMC also got abundant volunteers to do the legwork for various other things. “People from within the community came forward to work for the community, and manpower was never an issue,” says Vanessa D’Souza, who helms the NGO SNEHA that works with the residents of Dharavi. The World Health Organization, too, lauded this very aspect in Dharavi’s fight against Covid-19. “Children, almost 50 of them, from the community came over asking for work, and we paid them 1300 per day for distributing food,” says Dighavkar. “We had no shortage of manpower; when we advertised for 50 ward boys, 450 people queued up outside my office.”

Money, too, was available as a number of people, including many celebrities, contributed towards salvaging the crisis in Dharavi. “Everyone wanted to donate to Dharavi only,” says Dighavkar. “We acquired a few private hospitals in the area, including the 51-bed Sai Hospital and Prabhat Nursing Home, and a number of other facilities including lodges, hostel rooms, marriage halls and hotels. So, logistics was never an issue, and we were equipped to have an instant end-to-end solution in Dharavi itself from treatment to discharge.” By the first week of June, a 200-bed hospital was set up complete with oxygen supply machinery, some of which were donated by Bollywood celebrities.

Measures such as appointing community coordinators from within Dharavi to be in-charge of sealed-off containment zones worked well, too. “There was a sense of belonging and ownership among these coordinators, and that is why we observed that there was strict adherence to rules,” says D’Souza.

After witnessing high numbers in April and May, it was only on and after June 3 that the community started witnessing a dip in Covid-positive cases. And, now, Dharavi is inching towards zero active cases. But the fight is not over.

“It is too early to celebrate,” says Vinod Shetty of ACORN India. “The government can now seriously think about upping the hygiene and sanitation levels in Dharavi so as to improve the living conditions of people there.”