From cautious words to all-out bhakti, party's response to Ram Mandir has been varied 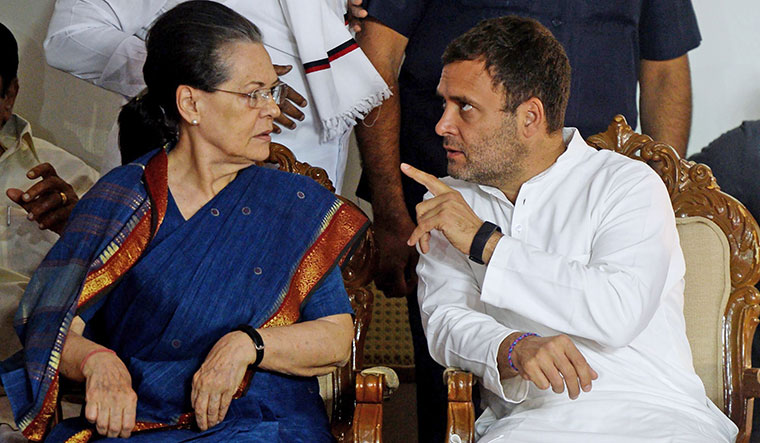 Congress leader Sonia Gandhi had, on December 6, 1992, stated that had her husband, Rajiv Gandhi, been alive, the Babri Masjid would not have been demolished. Some years later, Rahul Gandhi echoed the view.

From that sentiment to the cautious stand that the party had faith in the judiciary and it would accept the court's decision on the issue to welcoming the construction of the Ram temple in Ayodhya, the Congress has traversed a wide trajectory.

As the BJP rode on the pro-Hindutva sentiment, fueled by the promise of building Ram temple at the Ram Janmabhoomi in Ayodhya, the Congress struggled to do a tightrope walk between its secular foundation and the demands of the changed political scenario. This dilemma was evident in its silence as the party took its time to take a stand on the construction of the temple.

Barely 24 hours prior to the foundation stone laying ceremony, AICC general secretary Priyanka Gandhi Vadra, who is in-charge of party affairs in Uttar Pradesh, came out with a detailed and finely nuanced statement. She attempted to connect the occasion with the party's avowed secular ethos by stating that Lord Ram has always been a binding thread for humanity and human good in India's ethos from times immemorial.

Lok Sabha MP Shashi Tharoor tweeted: “Justice for all, righteous conduct, fairness and firmness in all dealings, moral rectitude and courage. These values are much needed in such dark times. If they spread throughout the land, Ram Rajya would not be an occasion for triumphalist bigotry.”

These carefully worded responses are, however, very different from the all-out bhakti that has been exhibited by leaders such as former Madhya Pradesh chief minister Kamal Nath and Chhattisgarh chief minister Bhupesh Baghel. If Kamal Nath held a Hanuman Chalisa recital at his residence on the eve of the function in Ayodhya, Baghel has announced plans to construct a grand temple in honour of Kaushalya, mother of Lord Ram.

There is discomfiture in the party with regard to its response on the Ram temple issue, and leaders are concerned about ending up as a poor copy of the BJP and ceding the secular space. Voicing the view, Lok Sabha MP from Kerala T.N. Prathapan has written to Sonia Gandhi, pointing out that the statements of leaders like Kamal Nath and Digvijaya Singh were disappointing as there are a million people grieving the memory of Babri Masjid even as they have accepted the court verdict.

Prathapan said Priyanka has taken a position which is acceptable as she wished for unity in the name of the temple. “We certainly know that such unity wouldn't be there as far as Sangh Parivar has power. Still, by considering the ground realities of the politics in north India, especially in Uttar Pradesh, Priyanka Gandhi has kept the concern and dignity in her statement,” he said.

He went on to ask if the Congress was not bowing low for temporary successes and said the party cannot oppose an extreme form of nationalism and end up as its soft prototype.

There are others who feel that the Congress could not have opted for silence at this juncture as it would have only given the BJP an excuse to attack it over its perceived appeasement of the minorities. At the meeting Sonia Gandhi had with the Rajya Sabha MPs, Deepender Hooda had raised the issue, saying the Congress should make its stand clear on the 'bhoomi pujan' and in fact welcome it.