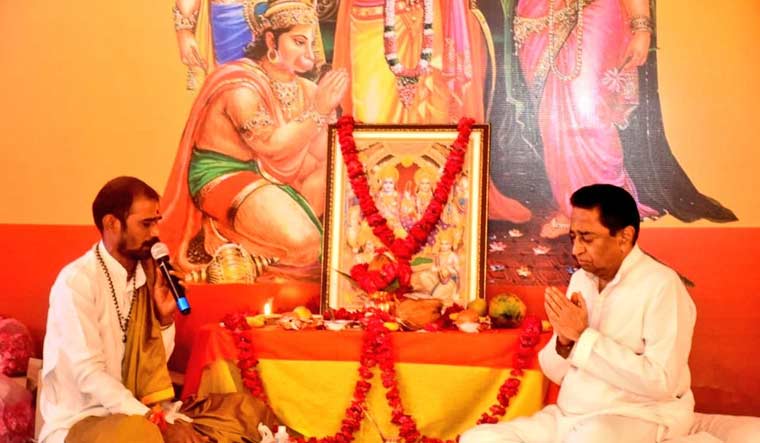 Kamal Nath changed his profile picture and cover photo on Twitter, giving them a distinct saffron hue | via Twitter

A Hanuman Chalisa recitation, along with other religious rituals, was held at the official bungalow of former Madhya Pradesh chief minister and Congress chief Kamal Nath in Bhopal on Tuesday morning. Several Congress leaders across the state too recited the Hanuman Chalisa at their homes or nearby temples individually, following the appeal by Kamal Nath.

Although this came on the eve of Ayodhya Ram temple bhoomi pujan, the party hasn't officially linked the two events. The event also comes ahead of the crucial by-polls to 27 seats in the state.

Interestingly, Kamal Nath also changed his profile picture and cover photo on Twitter, giving them a distinct saffron hue. In the cover photo, the Congress leader is seen wearing saffron robes, while in the profile picture Nath has an image of Lord Hanuman in the background.

After the religious programme, Kamal Nath said it was a day of happiness as worship of Lord Hanuman and Chalisa recitation was held for prosperity and progress of the state.

Reacting to the BJP's taunts, Kamal Nath sought to know why the BJP gets uncomfortable whenever the Congress undertakes any religious activity. “Do they have a patent on religion? Have they taken a contract or agency of religion,” Nath asked.

He further said he had got a massive idol of Lord Hanuman installed in his hometown Chhindwara, and listed other initiatives, including construction of cow shelters, removal of hindrances in construction of Ram Vangaman Path, and development plans for Mahakal and Omkareshwar temples. “It is only that we do not use religion for politics and do not turn it into an event. We all are religious by nature, but we do not try to link up politics and religion,” the Congress leader said.

Kamal Nath said the Congress welcomes the Ram temple construction. “Rajiv Gandhi started this in 1985 and laid the foundation stone in 1989. The dream of Ram temple is getting fulfilled because of Rajiv ji. If he was there today he would have been very happy to witness this,” he said.

The former chief minister also announced that the state unit of the Congress is sending 11 silver bricks for the Ram temple construction on behalf of the people of Madhya Pradesh. The bricks have been purchased through personal donations of Congress leaders, he said.

Meanwhile, Home Minister Narottam Mishra took a swipe at the Congress for the Hanuman Chalisa event and said the Congress wants to have its feet in two boats, but the devotees of Lord Ram understand all their ploys. “While one of them is reciting Hanuman Chalisa, another (Digvijaya Singh) is pushing for deferment of bhoomi pujan date. How can a party, whose national president Sonia Gandhi hasn’t spoken a single word about the Ram temple, take credit for the temple? This farce of Congress won’t hold,” Mishra said.