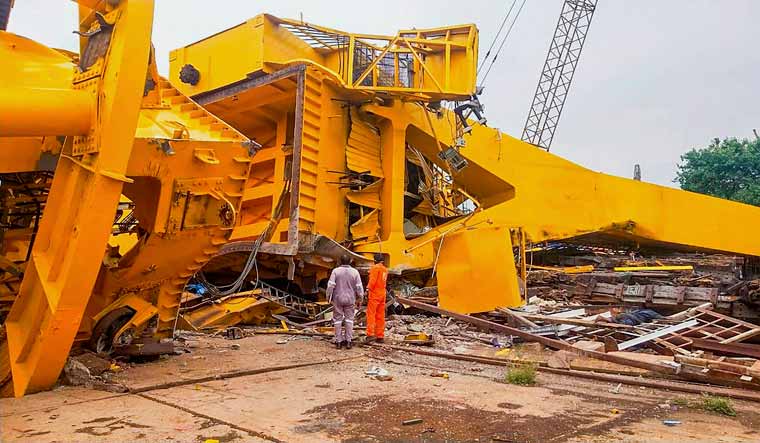 Defence Minister Rajnath Singh expressed anguish at the loss of lives in Vizag due to the crane accident at the Hindustan Shipyard Limited (HSL) on Saturday, stating that a departmental enquiry committee had been instituted to establish the cause of the mishap.

A massive 70-tonne crane under trial run in the HSL at Vizag, Andhra Pradesh, came crashing down, crushing 11 people to death in the first such mishap in the public sector shipbuilding company's 75-year-old existence.

"Extremely anguished by the loss of lives due to an accident at HSL facility in Vishakhapatnam(AP)," Singh tweeted.

"My thoughts are with the bereaved families. May the injured recover quickly," he said. "Departmental Enquiry Committee has been instituted to establish the causes leading to the accident."

Four of the victims were HSL employees, including a supervisor, while the seven others were workers of three contracting agencies, District Collector V Vinay Chand told reporters after inspecting the accident site.

All the deceased who came under the falling iron mass, rail-mounted and known as jetty crane for being on a ramp to handle cargo, were killed on the spot.

TV visuals showed the equipment collapsing on the ground with a loud thud after its cabin and base snapped during the trial run.

The new crane was erected at the HSL about two years ago but was not yet commissioned for regular operations due to change in contractors.