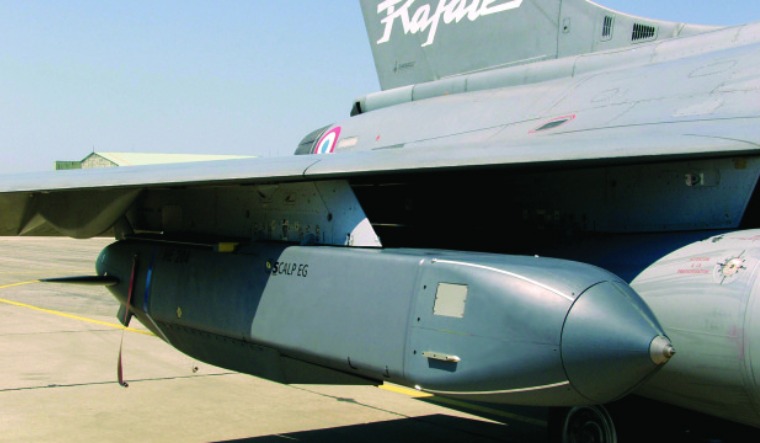 A Scalp missile on a Rafale jet | MBDA

As the standoff with China at the Ladakh border continues, the Indian government is making emergency purchases of weapon systems for the three armed services.

On Tuesday, news agency ANI reported that the Indian Air Force was planning to acquire "more Spice-2000 bombs" from Israel for the purposes of destroying bunkers and buildings.

The SPICE-2000 made headlines last February when it was revealed that Indian Air Force Mirage 2000 fighters had used these weapons to bomb the terror camp in Balakot.

In the strictest sense, the SPICE-2000 is not a bomb in itself. The SPICE-2000 is from a family of munitions. SPICE, which stands for Smart, Precise Impact and Cost-Effective, is a guidance and manoeuvring kit manufactured by Israel's Rafael. The SPICE kit adds a sophisticated guidance system—consisting of inertial navigation, satellite guidance and electro-optical sensors for pinpoint accuracy—and control fins to a conventional unguided bomb. The SPICE turns a conventional 'gravity' bomb into a sophisticated, long-range guided weapon.

Their long range makes the SPICE family of smart bombs suited for hitting targets in protected air space. China operates a variety of potent air defence systems, including the Russian S-300 and the newer S-400 as well as indigenous platforms.

Soon after the Balakot attack last year, PTI reported that the Indian Air Force was "in the process of equipping the Su-30MKI with Israeli SPICE-2000 bombs, to make the fighter jets more potent". The Su-30MKI is numerically and technologically the most important fighter in Indian Air Force service, with around 250 aircraft in operation. With a maximum takeoff weight of over 35 tonnes, twice that of the Mirage-2000, a single Su-30MKI could carry at least three SPICE-2000 bombs, giving it massive operational flexibility.

More SPICE munitions are not the only weapons that will strengthen the Indian Air Force's ground-attack capability. Earlier this week, The Print had reported that France had shipped to India Meteor air-to-air missiles and Scalp cruise missiles, both of which will arm the Rafale fighter jets destined for the Indian Air Force. The Scalp is an air-launched cruise missile manufactured by European defence consortium MBDA. The Scalp, which is designed in France, weighs around 1,300kg. According to MBDA, the Scalp has a stated range of 250km, though media reports claim the weapon can go twice that distance.

Like the SPICE-2000, the Scalp uses a range of guidance options—GPS, inertial navigation, infra-red seeker and terrain reference. The Scalp also has a design that emphasises 'low observability' (stealth) by reducing exposure of its air intakes and flies at very low level to avoid radar detection. The Scalp has been advertised as being capable of destroying "high-value" fixed targets such as air defence command-and-control centres and bunkers.

The Scalp missile and its British derivative, the Storm Shadow, have been used in multiple conflicts in the past two decades, including the invasion of Iraq and air strikes over Libya and Syria. In addition to the air forces of France and the UK, the Scalp missile and Storm Shadow have been exported to Greece, Saudi Arabia and Qatar, among others.

The Rafale can carry two Scalp missiles, along with three large fuel tanks, in a long-range attack configuration. Along with the air-launched Brahmos missile, the Scalp will be the first 'deep strike' missile of the Indian Air Force. However, in its current configuration, the Brahmos is too heavy and a single Su-30 MKI can only carry one missile.

The addition of more SPICE munitions and arrival of the Scalp cruise missiles is crucial for the Indian Air Force, given the relentless growth of China's fighter fleet and also its development of air-launched cruise missiles. China's fleet of H-6 bombers are being equipped with missiles like the CJ-20, which is estimated to have a range of over 1,000km.