Interview with Dr Rahul Pandit, the intensivist who tested positive for COVID-19 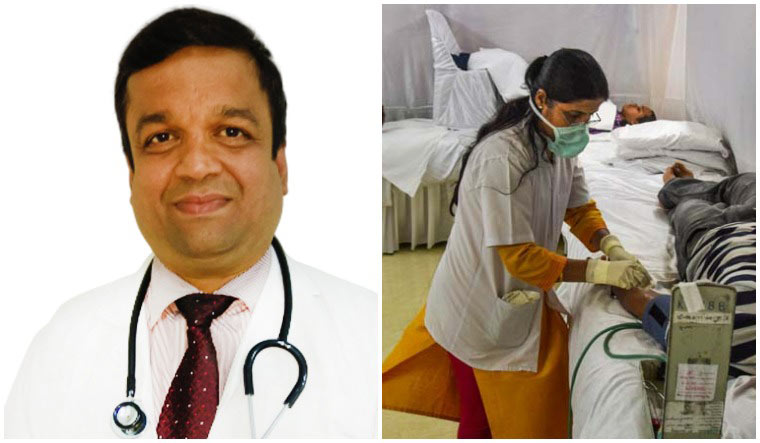 Three weeks after he first tested positive for COVID-19, Dr Rahul Pandit, head of critical care medicine & ICU at Fortis Hospital, Mumbai, and member of the state's COVID-19 task force, talks about his experience of being on the other side of the fence. He also shares his insights on the current situation of the COVID-19 fight in Mumbai and the state as a whole.

Q/ As a member of the state COVID-19 task force, could you confirm if Maharashtra has crossed the peak?

To say we have peaked will be too ambitious. I'd rather say, we've plateaued. If you take the last 15-day average, we have somewhere between 1,100 to 1,500 cases every day. That usually means you've reached your plateau. Now, unless there is a second surge because of the gradual opening of the lockdown which could happen in the next week or so, and then gradually the numbers should start coming down in Mumbai at least. As a whole in India, I think every city/state will peak differently.

Q/ We are still not testing the asymptomatic patients as we should ideally be doing.

I think we have so far done a good job with the way we've gone about testing. One could always argue for more testing to take place. But if you follow the models of Korea which tested every person in the entire population, then that is not practical for India. So, our policy of essentially testing those patients in whom the likelihood of a positive result is high, is a good, logical and scientific approach. As against going on randomly testing. If we only had a population of one or two crore like Australia, or New Zealand or Korea, then by all means we could have tested everyone.

The pandemic evolves. Four-five weeks ago, there was a shortage of ward beds. Now, it is the other way around. Normal beds are easily available. In fact, the jumbo facilities have beds available all the time, whereas the ICU beds are in shortage. But, when we create ICU beds, we need to make sure that we have the required trained staff to cater to those new beds. ICU is a super specialty. You can create the infrastructure but you cannot produce intensivists. There are only a handful of intensivists in Mumbai. This mars the quality offered. We need to have double the number we have currently.

Q/ There have been several conflicts within the task force itself, like the one on whether to give a green signal for the use of HCQ or not.

Our role is to advise the government on the basis of evidence. There is no question of disagreement because the evidence is black and white. HCQ is a classic fiasco. Three months ago, everyone said it was the right choice but now every journal has retracted on it. So, it is the duty of the task force to inform accordingly.

Q/ You tested positive for COVID-19, going from being a caregiver to a care-seeker.

This has been a once-in-a-lifetime experience. It started with a low grade fever that went on for three to four days. My oxygen levels dipped and I began to feel febrile. But then, I faced it head on. While doing my duty as a doctor, I have always been acutely aware that at some point, a breach can happen and I can get infected. We doctors are also just like other common people. Of course, there was a high chance of getting infected in the ICU but I can tell you for sure that it was not from the ICU because I fell sick when I was off COVID-19-duty. None of my team members caught the infection. We tend to drop our guard outside the ICU and maybe that is the reason.

Q/ How did you protect your family from in the past three months that you've been on active duty?

I was always clear that I'd only occupy one room of the house which is right next to the main door, so as to not infect everyone else in the family. It's been more than hundred days now. The food is served in separate utensils.

Q/ There have been reports that young people are also equally prone to COVID-19 as are the elderly and those with co-morbidities. At 47, you, too, were put on oxygen support.

Boosting one's immunity is not a one-day job. It takes years. It builds up during one's growing years and then it's all about maintaining it. The main issue is about the viral load and an individual's response to it. I took Remdesivir—the antiviral medication—and dose of steroids.

Q/ Remdesivir is not yet freely available for patients who are in dire need of it, especially in public hospitals in Mumbai.

It is now freely available for patients in emergency care, as is Favipiravir. It was difficult to procure earlier. But is much easier to get now.

Q/ At a time when doctors who test positive and are working in public hospitals, find it difficult to get a bed for themselves, do you think senior doctors in private hospitals are more privileged?

No. Nobody is any more or less privileged. Just that the infrastructure in private hospitals is better. All frontline healthcare workers are being given priority in hospitals in which they work. All institutes look after their own people.